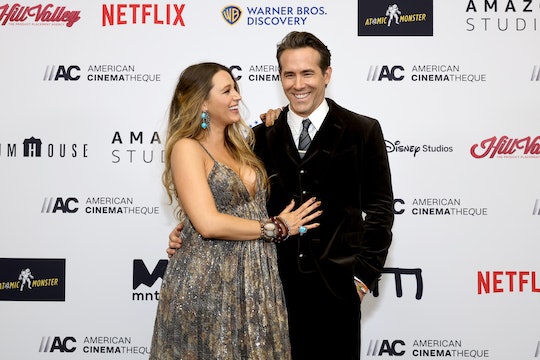 And outed himself as a Shania Twain fan too.

Ryan Reynolds was the epitome of a dapper dad as he took center stage at the 2022 People’s Choice Awards in his fitted suit (with snazzy sweater-vest underneath) to accept the prestigious Icon Award. Reynolds was all about the love as he gushed over his family and also hinted that Blake Lively’s due date with their fourth child together could be any day now.

Amid an acceptance speech filled with gratitude for his family and loved ones, Reynolds not only thanked his wife Lively, he revealed that they could become parents again in the very near future. “It's gonna be a fourth child very soon. If it happens tonight while I'm here I will be looking for a couch to sleep on for a little while ... I’d venture to guess that Shania Twain has an amazing couch, I’m just saying. But Blake and my girls, you are quite literally my heart, my hope, my happiness. I joke that my family exhausts me, but in reality you give me more strength than any man could possibly deserve.”

Earlier in his speech, of course, the known funny man kicked it off with some humor, joking that he “finally tested positive for icon.” But the Spirited star quickly pivoted to the mushy-gushy stuff he is known and loved for as he revealed that his gratitude “starts with my family and it ends with my family.”

He also gave a shout-out to his mother and brother, who seemingly subbed in as a date for Lively (who was probably resting her bump at home in some cozy holiday pajamas). Reynolds got a little emotional as he paid homage to his late father too. “To my mom. To my three brothers, one of which is sitting right over there. And to my dad, who left us a few years ago. Boy, if he could see all the things going on, he wouldn't be impressed with this stuff; he'd be the most blown away by his three little granddaughters.”

“Wherever he is right now, I promise you he’s probably not watching the People’s Choice Awards. You know, he cultivated most of his opinions in life from old episodes of Baywatch, so he’s probably doing that is my guess. But to my original family, thank you for making me who I am. Thank you for your unfailing support of me despite some pretty pretty damn questionable years there.”

And if being a doting family man isn’t already iconic enough, Reynolds capped off his speech with some praise-worthy plugs. The Deadpool star put a spotlight on two awesome organizations that he works with (Group Effort Initiative and Create Ladder) that provide “access and opportunity for communities historically discriminated against or marginalized.”

So while it must be cool to have a celebrity as a father, Reynolds’ daughters James, 8, Inez, 6, and Betty, 3, definitely have a dad to look up to for more than just his fame and destiny to take over father fashion as the next sweater influencer.

With his signature mix of heart and humor, it’s basically it’s impossible not to love Ryan Reynolds. The only person who seems less-than-impressed by this man is the equally iconic, Shania Twain, who low-key showed her love for the fellow Canadian with a pretty noticeable revision to one of her most singable songs.