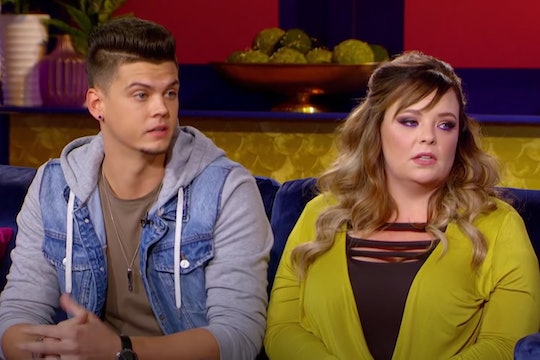 "Is that so much to wish for/want?," the MTV reality star asked her followers.

Just weeks after opening up about her miscarriage, Teen Mom OG's Catelynn Lowell says she wants one more kid.

"I just want one more baby... is that so much to wish for/want?," Lowell wrote in a post on Facebook, which she reposted to her Instagram story on Monday. "I pray that the Lord will bless us with one more... if not I am absolutely grateful for the three healthy, little girls that we do have."

Earlier this month, Lowell revealed that she had suffered a miscarriage on Thanksgiving Day. The Teen Mom OG star told Champion Daily that she and her husband, Tyler Baltierra, found out they were expecting just a few days before Thanksgiving. But days later, the world came "crashing down" on them. Now, Lowell is continuing to open up about her sadness surrounding her miscarriage on social media and her desire to have more children in the future.

"Infant loss/miscarriage grief is real... ," Lowell wrote on her Instagram story on Monday. "You are NOT alone and I know I'm not either... sh*ts hard sometimes. And that grief and sadness comes in waves and that's OK."

Lowell and Baltierra are the parents to two girls — 5-year-old daughter, Novalee Reign, and 1-year-old daughter, Vaeda Luma. They welcomed a daughter, Carly, in a 2009 episode of MTV's 16 & Pregnant, which documented their journey to placing her up for adoption.

This grief process is something that Lowell is familiar with. The mom of two suffered a miscarriage in 2018 and was open about how it caused her to suffer "deep, dark thoughts," according to E! News. "It was after we struggled with a miscarriage, and I kept waking up with panic attacks, and they were not going away, and it was for like, two weeks," Lowell said during a 2019 episode of the podcast, Reality Life with Kate Casey.

Lowell's words do have the power to show others that they are not alone in their grief. The MTV star has gotten a tattoo in honor of her "two angels in heaven" and has been open about talking about her miscarriage on social media. And for now, Lowell told Champion Daily that she is placing hope in the future. "I know that when the time is right it will happen and everything in life has a plan and destiny," she told the publication in December. "Now we have two beautiful angels watching over us and our children."

"One day I know I will witness those angels and get to spend eternity with us," she added. "Until then I pray they watch over their siblings and us."