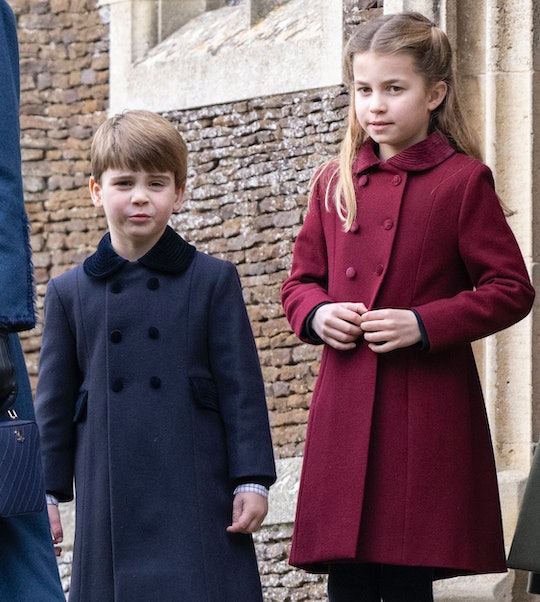 Prince Louis already has a reputation for being a bit of a maverick. After his star-making appearance at the Platinum Jubilee in June, royal watchers know to expect the unexpected from the 4-year-old son of the Prince and Princess of Wales. He might dance in his seat, sass his mom Kate Middleton, or do a complete about face and be a total cuddly sweetheart. During his first ever walk to church with the royal family on Christmas Day, Prince Louis kept his crown as the most surprising royal in the absolute sweetest way by being a true little gentleman with his big sister Princess Charlotte.

The youngest member of the Wales family joined other senior members of the royal family for the annual walk to church from their Sandringham Estate on Christmas Day for the first time this year. His 7-year-old sister Princess Charlotte and 9-year-old brother Prince George have joined their parents on the walk before, and now it was Prince Louis’ turn to take part in the tradition. And boy did he ever love being included. He was seen running all over the place as his siblings walked sedately with their father and his mom laughed good-naturedly.

But perhaps the most charming moment was when he raced after Princess Charlotte to give her a little bouquet of flowers. Even dad Prince William looked charmed, smoothing a hand over Prince Louis’ head and smiling down at him affectionately.

Prince Louis, or “Lou Lou” as Princess Charlotte and Prince George call him, is truly the epitome of the baby of the family. Sweet and funny and seemingly without any sort of filter, he is so much the youngest that Kate Middleton has even said she can’t stop thinking of him as her baby. While his older brother Prince George seems to be a bit shy and reserved in public and Princess Charlotte is a little royal taskmaster bent on ensuring her brothers follow all of the rules of decorum, Prince Louis is happy to spin about and collect up flowers for his big sister.

Every family needs a little Prince Louis in the mix to keep things interesting. And to be surprised by an unexpected bouquet of flowers every now and then.