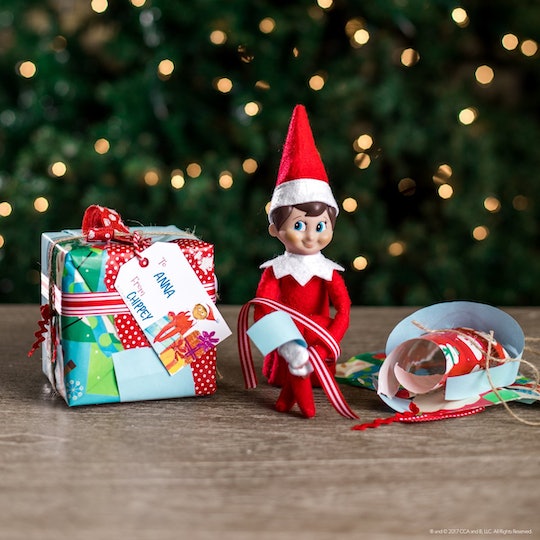 The Elf on the Shelf/Twitter

If Your Kids Love Their Elf, You Don't *Have* To Put Him Away On Christmas

Your Elf has options.

by Jacqueline Burt Cote and Meguire Hennes
Updated: Dec. 1, 2022
Originally Published: Dec. 19, 2017
We may receive a portion of sales if you purchase a product through a link in this article.

Now that you've spent a few weeks faithfully crafting festive displays for your family's Elf on the Shelf and tiptoeing around the house after bedtime hiding your seasonal visitor in unexpected locations, there's probably a small (not so small?) part of you that's merrily planning his departure. Except that you might not be completely sure when exactly he's supposed to hightail it back to the North Pole. Does this tradition have an annual expiration date? What to do with your Elf on Christmas Day might be the number one question in your mind as the holiday approaches. What are some Elf on the Shelf’s last day ideas?

When is the Elf On The Shelf’s last day?

Santa's helpers fly back to the North Pole on Christmas Eve. And, in case your kids want to know, their return is necessary for several reasons: They're needed to help Santa answer letters, to take part in "special projects" like the building on marshmallow igloos, tend to the reindeer, hang with their friends and "pass Scout Elf Training Camp." Following that logic, one would think that Elf's last night in your home would be December 23, but from the looks of social media, pretty much no parents at all get rid of their elf that early. Instead, most people seem to use Christmas Eve as an opportunity to give their Buddy (or Scout, or whatever you named your guy/girl) a big send-off. But... then what?

Can you touch your Elf on Christmas Eve?

Christmas Eve is debatably the most exciting day of the year, however, that doesn’t mean the rules change. Even though your kiddos probably want to embrace your Elf with tons of love before he leaves, he still has to fly back to the North Pole. So, just like the other 23 days, don’t touch the Elf. If they touch him, it’s possible he won’t have enough magic to make it home. If your kids want your Elf to return next Christmas, it’s best to share your goodbyes in a different, non-physical way, like writing a letter to Elfie, taking a picture with him in his last location, or even watching An Elf’s Story: The Elf on the Shelf as a family. You could even tuck him in an Elf on the Shelf carrier so that kids can get up close and personal with Elfie without breaking any important rules. You want to make sure your Elf’s departure is recognized, without putting his Christmas magic at risk.

Does Christmas Eve have to be your elf’s last day?

After investing so much time and energy into your Elf, simply stashing him away in a box for the next 11 months seems sort of cold — and not in the fun, frosty sense of the word. What, one minute the Elf is perched on a homemade zipline in the middle of your living room and the next he's relegated to a shelf in the closet? That doesn't seem very Christmas spirit-y to us. Yeah, he's a doll, but he's also sort of a family member. (Remember: Your kids think he's alive, sort of. Probably?)

The truth is though, official website recommendations aside, there's no reason why you absolutely have to evict your Elf after Santa's visit. It's not like the Elf police are going to come knocking on your door. Who's to say your Elf can't join your family for Christmas dinner? And just think of what a festive addition the Elf would make to your Christmas morning traditions. Whether you pose the Elf under the tree with the presents, eating the crumbs from Santa’s cookies, or seated at the breakfast table with a freshly baked cinnamon bun, the Elf’s presence is bound to make everything just a little bit more magical.

How long can your elf on the shelf stick around?

Surely after all his hard work as part of Santa's worldwide surveillance team your Elf deserves to sit down for a nice meal with the people he's been spying on for weeks, right? And it's safe to say any Elf would be thrilled to help open presents (it's just a shame he can't help clean up all the crumpled wrapping paper or wash dishes). And there's no reason why the Elf has to make himself scarce after bedtime on December 25. Have plans for a post-holiday getaway? Why not bring your Elf along? Bonus points if you're headed someplace tropical. Elves don't exactly get the chance to soak up too many rays the rest of the year.

If your kids have gotten particularly attached to your Elf and you're sensing impending heartbreak on the horizon, you might even want to consider making him a year-round addition to the family. Write up a letter from your Elf on Christmas morning explaining that he loves living at your house so much, Santa is making an exception and allowing him to stay all year (reporting back to the North Pole all the while). Who knows, maybe his presence will inspire them to be on their best behavior even during the off season! No need to keep hiding your Elf every night, but you might want to occasionally bring him out every so often to remind your kids he's around. Maybe he'll even find a hobby or two while he's on sabbatical.

When it comes down to it, what's one more guest on Christmas Day? And if he stays on for even longer, there's most likely someplace for him to hang his pointy hat. Perhaps he can move into Barbie's guest room or borrow the Batmobile from time to time. This is one case where the phrase "the more, the merrier" really does apply.

For your Elf’s last day, don’t be afraid to go big with his final day of mischief. In the midst of the Christmas Eve chaos, make sure to set aside time to truly go all out for your kids. Elfie will appreciate it. Here are some Elf on the Shelf last day ideas:

What if you’re ready to say goodbye to your elf?

Of course, if you feel like your real holiday present is that you get to stow that elf away until the last few weeks of the year, then it's the perfect time to find a good hiding spot. Make sure you tuck them in a part of the house that is impenetrable to your little ones — the last thing you want to do is explain to the kids why the elf is tucked away with their old school projects in the middle of spring — and in a spot that you will remember. Yea, good luck with that.

The other option to ensure that your little ones won't stumble upon the elf prematurely before the following year is to get rid it from your house altogether. Send it off to grandma and grandpa's, donate it to the Salvation army, or gift it to another family if your kid is borderline too old for the elf's antics anyway.