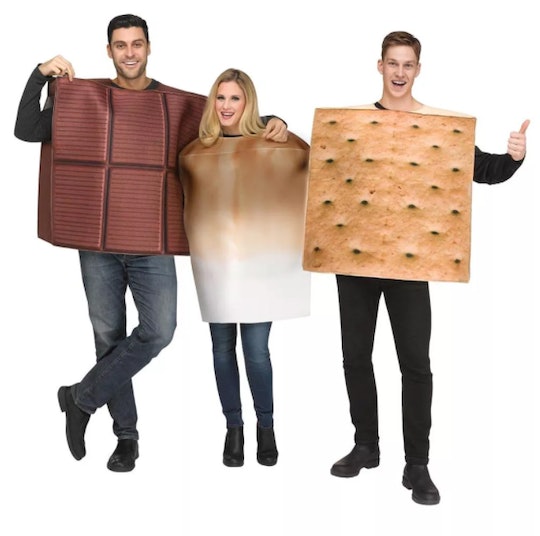 You know what they say? Three’s company. And if your trifecta does everything together, including trick-or-treating, you need one of these trio Halloween costumes. Perfectly suited for groups of three, these costumes cover everything from favorite snacks to classic fairy tales.

Even better? Some of these costume concepts come in a pack, so you can split the price with your pals and save money. That means more cash for Halloween candy rather than forking over a small fortune on an individual character look. Of course, not every idea comes in a set of three. Some of these you’ll have to craft together from a variety of costume shops.

But no matter what way you piece your trio Halloween costumes together, you’ll have a brilliant BFF look come October 31. And if you get separated, all you’ll have a better chance of finding your buds in a crowd.

It’s a classic fall snack. Who doesn’t like to roast s’mores over the camp fire when the leaves begin to turn? Embody that fall feeling with a fabulous trio Halloween costume: a set of chocolate bar, graham cracker, and marshmallow trio Halloween costumes. The three tunics are one size and pull over the head. Thanks to computer graphic magic, each looks photo realistic so no one will question what the heck you are. Made of polyester and built to be roomie, you can comfortably celebrate the season and look like the most delicious group at any Halloween event. You know what they say? The s’more the merrier.

Rock, paper, scissors is a favorite game no matter what age you are. It’s easily identifiable and nearly universal in its appeal. Naturally, when it comes to trio Halloween costumes, it’s a great one. You could DIY a set of three costumes or just buy this pack that comes with three polyester and polyurethane foam objects. The scissor costume only requires the wearer to slip one of the grips over their head, while the rock and paper costumes are tunic designs with straps over each shoulder. Super easy to wear, these easy breezy costumes will give you the freedom to say “Paper covers rock!” then jump onto your friend, all night long.

Children of the ‘90s will appreciate this cartoon throwback, a costume set of the Powerpuff Girls. The TV show first aired in 1998 introducing audiences to three kindergarteners, Blossom, Bubbles and Buttercup, with superpowers. Show your kindergartener just how cool you and your friends are by donning their looks made up of these oversize t-shirts featuring the Puffs and then pairing it with matching colored glasses to give the effect of their big eyes. Channel your inner girl power for a night of fun that shows the whole neighborhood, as Blossom once said, “We’re not afraid of anything as long as we have each other!”

More interested in a low-key Halloween, but still would like to make some minimal effort toward a costume? Find two of your best friends and have them wear these sweatshirts. An ode to the early aughts “Peanut Butter Jelly Time” viral video, these trio Halloween costumes are three sweatshirts that read: “Peanut Butter,” “Jelly,” and “Time.” It’s as simple as that. But for those olds in the group who have been using the internet since dial up, this fun throwback will get a whole bunch of “oh yea, I remember that” on Halloween night. Meanwhile, you’ll be as comfortable as if you were watching the song on your laptop and not schlepping the streets in search of candy.

Who doesn’t love Hocus Pocus? The Disney film is a classic in Halloween camp and it offers the ultimate in on-theme trio Halloween costumes. Thanks to the stars of the show, the Sanderson sisters of 17th century Salem, Massachusetts, you and your three pals can pick from Winifred, Sarah, and Mary costumes (of which there are loads available online). Grab some wigs, scare spray — that’s right, that says scare spray — pointy shoes, props (like a magic potion or two), then rock these multi-layered, petticoat topped wicked witch gowns for an ensemble look that will have your friends squealing in delight.

Work at a restaurant? Or just love setting a nice table? Get your friends into the fun with trio Halloween costumes that show your appreciation for fine dining: a silverware set. This three-for-one deal includes costumes for a knife, fork, and spoon all made of shiny silver poly-foam. Essentially giant hats, each utensil fits on over the head then hangs down in front like a tunic. That means you’ll have to wear your own duds underneath, but no problem. Just tell your pals to put on black pants and a black long sleeve and you’ll have a matching set in no time.

What are the three little pigs doing Halloween night? Blowing up the house. That’s right. The Big Bad Wolf won’t be the one huffing and puffing come October 31. It’ll be you and your porcine pals bringing the hot air in these trio Halloween costumes that are inflatable pig suits. Thanks to 100% polyester and an internal fan device (which takes four AA batteries), you and your two best friends will look like giant piglets while out trick-or-treating. The garments zip up the front and the face pops out a hole below the exaggerated hood that features a snout, eyes, and ears. Within 80 seconds your three little pigs crew costumes will be blown up and you can have a high on the hog time.

Another classic food item, hot dogs are an American favorite. If you want to showcase your love of tube meat, simply grab two pals to put together a hot dog, bun, and ketchup group. This idea requires purchasing two costumes, one duo set of a bun and hot dog and one separate ketchup. All are tunics made of durable polyester and can be hand washed should you spill any, well, er, ketchup on them. Sure, it requires a bit more investment, but your pals will be so impressed when they see your commitment to the cause. In fact, they might say they never sausage a thing.

Oh my! The classic line from The Wizard of Oz comes to life in this lion, tiger, and bear costume that’s as easy as putting on three hats. Hey, if you don’t want to go wild with an intense costume motif, no one will blame you. But you can still get into the spirit with your pals by at least popping on a couple caps for these trio Halloween costumes. Soft, plush, and covered in faux fur, these hats are detailed to look like the animals that worry Dorothy so. In fact, if you wanted to up your trio look, you could multiply it by two and get some other friends to dress up as Dorothy, the Tin Man, and the Scarecrow or Cowardly Lion.

“If you can dodge a wrench, you can dodge a ball,” says Patches O'Houlihan, the coach of the Average Joes in the movie Dodgeball. Words to live by. If you and your friends take this motto to heart, you need to go as teammates on the Average Joes, the movie’s underdogs. And you can with this costume. Just buy three of these sport suits. The costume includes a gold jersey and shorts with the team’s name printed across the front. To amp up the look, pair your trio Halloween costumes with matching red sweatbands and wristbands and give the night your best Vince Vaughn.

All part of a complete breakfast, a trio Halloween costume of bacon, eggs, and pancakes is like being a walking Denny’s Grand Slam. Of course to make it happen, you can’t go it alone. Someone has to step up to the plate (get it?) and pull on an egg tunic, while another pal says yes to proudly wearing a short stack sandwich board. All you and your hearty breakfast mates need to do is pull these items over your heads, and maybe carry a bottle of syrup, and you’ll be ready to party until the wee hours of the morning when you can stroll into a Waffle House as returning heroes.

Ready to use the force on Halloween? No problem. Save your Jedi training for next week and instead get your friends to agree to go as Luke, Leia, and Han Solo with you this Halloween. With these three costumes you can become the intergalactic team of Star Wars legends. For Luke, grab this set that features pants with attached boot tops, tunic, and a belt with printed details. For Leia, buy this costume that comes with the princess’s signature wig, along with her hooded dress and belt. And as for Han? You can consider asking a fourth friend to go as sidekick Chewbacca, or just buy this costume that comes with a shirt, vest, trousers, belt, holster, and boot covers.

Have your friends in mind? Ready to set the stage as an all star cast of Hollywood (or breakfast) favorites? Then start shopping for these trio Halloween costumes.