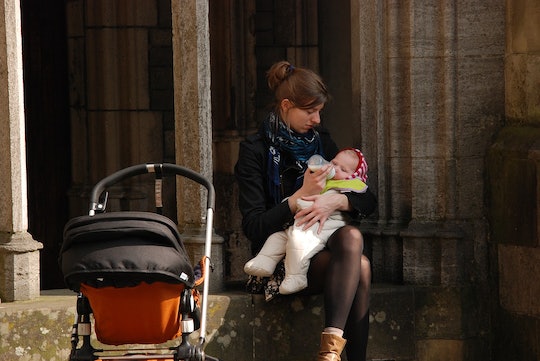 Why These Moms Chose To Formula Feed Their Babies

As a woman who breastfed her children for a cumulative 38 months, I think it's safe to say I'm a big fan of breastfeeding. I personally found it lovely and satisfying and there's no doubt that breast milk is a magical substance. But do you know what's even more lovely and satisfying and magical and good for babies growth and development? Their mother's mental and emotional well-being. Some moms prefer, for whatever reason, formula feeding so breast is best, unless it's not. I asked moms to discuss why they decided to formula feed, not because they had to, but because they wanted to.

"But wait," you may interject, "you just said you breastfed your kids. What gives you the authority to discuss formula feeding like this? Stop taking away someone else's narrative." Great question, but actually I did formula feed my oldest child, just not exclusively. I realized days into his life that, for me, formula feeding and breastfeeding were not mutually exclusive and that formula could, at times, even be a tool to help me continue to breastfeed.

For the first two weeks of my son's life, I supplemented (seemingly incessant) nursing sessions with a few milliliters of formula. Doing so enabled me to rest (and therefore heal and not go absolutely insane with exhaustion) and gave him that little extra bit of food in his tummy he apparently needed. After a while, we had a handle on the whole breastfeeding session, so I thanked formula (you know, in my mind. I didn't actually thank a can of formula. I wasn't that delirious with sleeplessness.) put the can back in the cupboard, and went on to exclusively breastfeed for months, even after I went back to work.

After a while, though, I found I was not producing enough pumping to keep him fed while I was at work. It was around this time I remembered, "Ooh. Remember how awesome formula was back when he was a newborn? Rather than add yet another loathsome pumping session in my day, let's give formula to make up for what I'm unable to produce." That worked so well that around the time my son was a 10-month-old baby, I decided it was time to break up with my pump — at best our relationship could be described as "rocky"— and feed him exclusively formula while I was at work and continue to nurse him when we were together. We were able to keep that going until he was 17 months.

Formula-feeding was an excellent decision for me and my family, and I don't ever regret my choice. Here's what other women have to say about why it worked for them.