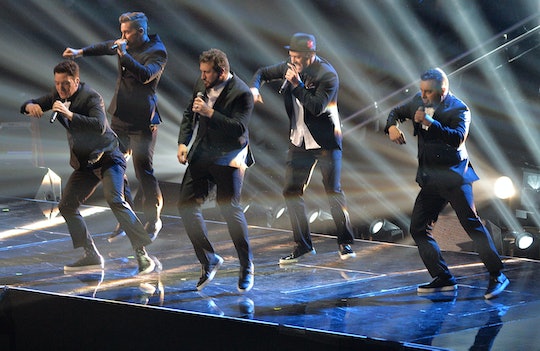 10 *NSYNC Songs That Lowkey Prepared You For Breastfeeding

Though I was more into the Backstreet Boys than *NSYNC, Justin and the boys got me through many a treadmill session with their infectious pop tunes in the '90s. I could've never predict how well those *NSYNC songs prepared me for breastfeeding, though. Two decades ago, I couldn’t have imagined what life with kids was going to be like, let alone conjured up a time when Top 40 music would serve any other purpose than providing a soundtrack for my work-outs.

I feel kind of bad for my kids, honestly. I mean, they don't currently have a playlist from which to draw inspiration in the future, like when (and/or if) they've faced with a fussy baby refusing to eat or a pumping session that barely yields an ounce of milk. As powerful as some of Beyoncé’s songs are, and as earnest as those Maroon 5 tracks sound, I am not sure my kids will be relying on them when they inevitably (maybe) experience those trying times of parenthood. I mean, is there anything more resonant than *NSYNC singing Believe In Yourself, off the Sesame Street: Songs from the Street, Volume 6? No, my friends. The answer is no.

I’m waiting for the next generation to produce their pop heroes that will guide them, through song, over the roughest patches of raising children. In times of parenting trouble, my mom had the Beatles (“Let it be… ”), and we have *NSYNC ("I'll be the one, you'll see... "). Here are some of their songs that, surprisingly, spoke to me as a breastfeeding mom: