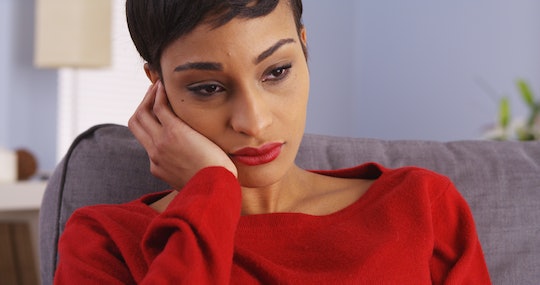 It didn't take me long to realize that, as a mother, I was going to "fail" on a regular basis. In fact, it was the second I held my son. Looking at his perfect face, I realized that I would never live up to the standard I had arbitrarily set for myself. I wouldn't be able to protect him from pain and I wouldn't be able to always be there and I wouldn't have all the answers to his questions. Thankfully, it also didn't take me long to learn the rules every mom should follow when she feels like she's failing; rules that remind you that mistakes are human and normal and unavoidable and just because they happen, doesn't mean you're "failing" at all.

The expectations society places on mothers are brutal, to say the least. Not only do we have to make sure our postpartum bodies don't look like they've just grown and birthed another human being, but we have to love every single aspect of motherhood and not give up on our own ambitions but quit work after we've had a baby. We have to be "perfect" and we shouldn't ask for help and we shouldn't take time out for ourselves, because that's "selfish." I mean, it's relentless and impossible to live up to and when we inevitably don't, we feel like we're failing. Well, I do at least. I am constantly trying to remind myself that I'm capable and the best person to be my son's mother and the only person he runs to when he's scared or hurt or just in need of a hug. I have to tell myself that the overwhelming feeling of inadequacy that I felt when I held him for the first time wasn't fair. It wasn't fair to my son and it certainly wasn't fair to me. Being scared of motherhood is normal — because holy sh*t is it scary — but I am capable (and so are you).

So, I can't say that every mother shouldn't feel like she's failing. That would be nothing short of hypocritical because, well, I feel that way on a pretty regular basis. I can, however, remind every mother that those feeling aren't fair, and they're certainly not accurate representations of how well she's doing as someone's mom. So, with that in mind, here are a few rules moms should follow when self-doubt rears its ugly head: