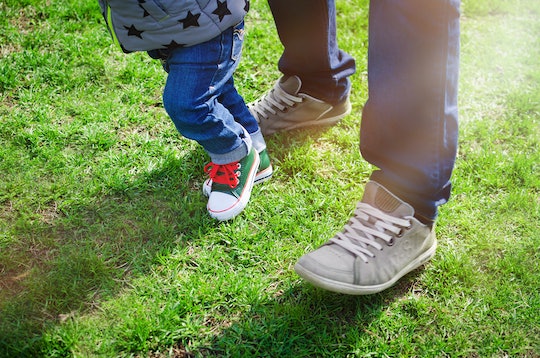 8 Reasons Why You Never Hear About Hot Mess Dads

As a mother who thinks a messy bun is an "updo" and yoga pants are perfectly acceptable pants and 30 minutes late is "right on time," I'm a self-identified "hot mess mom." I don't hide my mistakes or my mishaps but, instead, wear them on my stained sleeve and refuse to apologize for not always having my sh*t together. I do wonder, however, why we never hear about hot mess dads. I mean, I can be upfront and honest about my mess of a mom life, but I see my partner doing much of the same and, well, he's not labeled as a "hot mess dad." In fact, as an involved parent who stays at home with his son during the day and goes to school at night, he is labeled the best father ever who is just as rare and magical as a unicorn. Um, what?

I mean, I am very thankful that I have a parenting partner who is in the thick of this whole child raising thing with me, but I can't help but notice how different we're both treated by our society, even though we're doing the exact the same thing. When I forget my kid's snacks when we're at the playground and he's throwing a tantrum and I'm spilling coffee all over myself in an attempt to make him happy and find some toy at the bottom of his baby bag, I'm the "mess." When my partner does the exact same thing, he's adorable and endearing and "just doing his best." As as culture, we're much kinder and understanding to fathers when they make a mistake or simply don't have their sh*t together one hundred precent of the time, than we are to mothers. In fact, we're downright horrible to mothers, and have convinced most moms that making a mistake is an undeniable "failure," instead of a normal, necessary and unavoidable part of simply being a human being.

So, while I'm more than happy to lean into this whole "hot mess mom" label and own it, I do wonder why we don't offer dads the chance to do much of the same. I know that there are involved fathers who are making just as many mistakes and are publicly flailing just as often as mothers and, well, it's time we give them the label the collective "we" seems so hellbent on giving the not-always-perfect mom, too. With that in mind, here's a few reasons why that hasn't happened yet, because you can't fix what you don't know is broken.