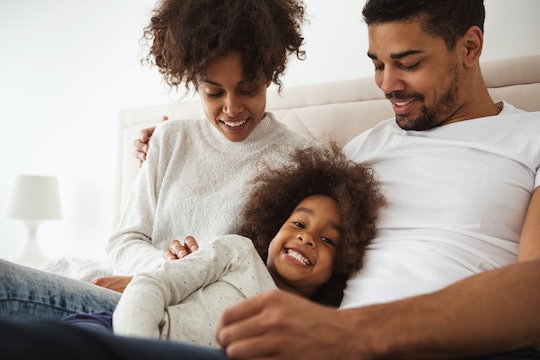 11 Signs You Actually Like Co-Parenting, It's Just Hard AF

Prior to meeting my partner, I never wanted children. Even though I'd been in serious relationships before, I never envisioned myself raising a child with someone. I never wanted to be a mom or daydreamed about being pregnant or had baby names picked out. Then I met my partner and things changed. Suddenly, I knew I could be a parent because he'd be the one I was parenting with. That doesn't, however, make co-parenting easy. I've realized there are signs you actually like co-parenting, it's just hard AF; so hard that you wonder if you can continue to raise a child with someone else; so hard that you want to just quit parenthood altogether because, ugh, it's a lot of responsibility, you guys.

My partner and I aren't married, and don't plan on ever being married. While we live together and we're romantically involved, we still check the "single" box on our taxes. We come from very different backgrounds, different families, and even have different political beliefs (which has made this election cycle nothing if not interesting). Because we're not the same exact person, there are moments when co-parenting seems like a f*cking chore I absolutely do not want to do. Sometimes, I want to be the only one making the decisions because, well, I wouldn't have to come to an agreement with someone else. Sometimes, I want to be the one to spend time with my son — by myself — because then I would have his undivided attention and I could be the person to give him everything he needs.

Those moments and those feelings, as valid as they are, are also fleeting. It doesn't take long for the frustration to subside, perspective to come back into focus and for me to remember that I wouldn't want to parent with absolutely anyone else. I know that co-parenting can be challenging, but it's so worth it (when your co-parent isn't toxic or physically, emotionally or verbally abusive, of course). Just because something is difficult, doesn't mean it's not worth it. So, with that in mind, here are just a few signs that you really do like co-parenting, it's just really f*cking hard sometimes.

More Like This
Stepmom Quotes & Sayings For Every Occasion
11 Signs You're Sexually Attracted To Someone, But Not In Love With Them
43 Instagram Captions For National Brother’s Day That Say It All
Say What's In Your Heart With These Stepmother's Day Quotes