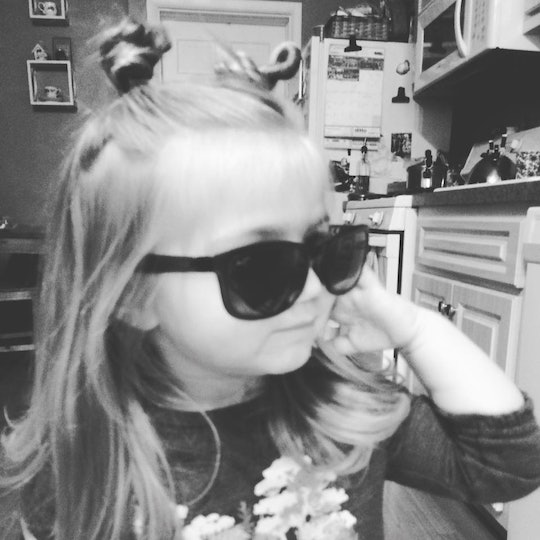 10 Signs My Daughter Isn't "Bossy," You're Just Being Sexist

My daughter is a force of nature. She cannot be ignored. At two-years-old she is the size of a three-year-old and has a correspondingly enormous personality. She is a cheerful Viking of a girl and never shies from making herself known. As she gets older, however, I can't help but worry that all the wonderful things that make her who she is will one day be seen as "too much." That she'll feel pressure to shrink herself any way she can. So I've already established rules to let people know my daughter isn't bossy, you're just being sexist, preempting any subliminal attack on her confidence, assertiveness, and desire to use her indomitable personality to lead.

I am so proud of both of my children, my son and my daughter, for demonstrating such consistent self-assertion and boldness. Of course, hello, I'm their mother. (I also frame their scribbles and date it because I think they're so artistic.) I'm biased. Deal with it. At the same time, no one can deny that these two are only ever themselves; they cannot be kowtowed into being anything other than completely true to who they are. I love their steadfastness because, even though I think of myself as bold and steadfast as well, I am nevertheless a people pleaser. I took it upon myself, from a young age, to try to be charming and non-threatening in order to be listened to and taken seriously. I didn't want to be seen as bossy. It breaks my heart to think that someone (or, more accurately, a wide variety of "someones" and "somethings") will try put pressure on my daughter to do the same, when my son will be encouraged — for the most part — to continue to be himself.

Not on my watch, jerks.

"But wait, some girls are bossy," you might say, "And bossy is bratty! Do you want your daughter to grow up to be a brat?" Of course not, but I want to encourage you to look at the behaviors my daughter is demonstrating, take her gender out of the equation, and see if it still looks "bratty" to you. Because "bossy" is very, very subjective. So, with that in mind, here are some handy dandy ways you can check yourself to see if you're actually working in the best interest of little girls...