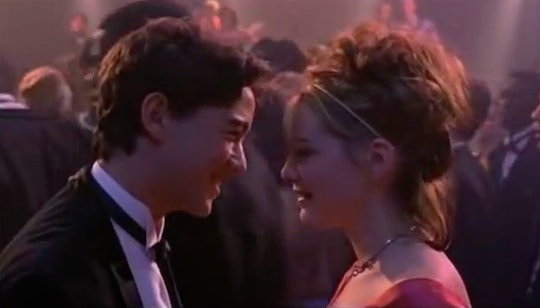 The smells one remembers from their teen years are likely potent, no matter the decade. Teenagers, as a demographic, are quite smelly, so they don't go subtle when it comes to masking (or enhancing) their odors. Prom, of course, is no exception. I almost get a headache when I remember all those berry, citrusy, minty, and sometimes spicy smells from "the big night." Still, recalling the smells every '90s kid remembers from prom will have you wanting to throw on a tasteful tiara and slow dance to your favorite Jewel song in no time.

More Like This
Therapist Says: Alone Time For Moms Is A Necessity, Not An Indulgence
Lightning Crotch Can Actually Tell You These 7 Things About Your Pregnancy
26 Magical Harry Potter Mothers' Day Gifts
This Star Wars Gift Guide Is Perfect For Any Fan

Intense memories (like prom) are often accompanied by a lot of sensory memories, with smell being one of the biggest sensory memories that people conjure up when recalling past events. Prom was a pretty big deal for me, since it was almost traumatic in how awful it made me feel about myself (via my "awesome" boyfriend at the time). I'm able to remember a lot about that night, for better or worse, especially through smell.

Prom should have been a fun time for me, considering I had a wonderful group of close girlfriends with whom I was going with and we all had cute and popular (read: jock) dates. This was a major "accomplishment" for our group, since just the year before we were kind of not the most popular bunch, often looked at as nerdy and goodie-good (because we were nerdy and goodie-good). What I should have done, besides broken it off with my jerk boyfriend in the first place, is just focused on the fun I could have had with my friends and torn it up on the dance floor and said to hell with the jock boys and my dumbass boyfriend at the time. Instead, I focused on my boyfriend and his wandering eye and allowed him to engage me in conversations about how sexy everyone else at prom looked and how much he would like to hook up with them if we weren't together.

Whether other kids of the '90s associate prom with a feeling of having had an amazing time, or, like me, feelings of disappointment, they are likely to remember all kinds of smells. Perhaps they will remember some of these old favorites: