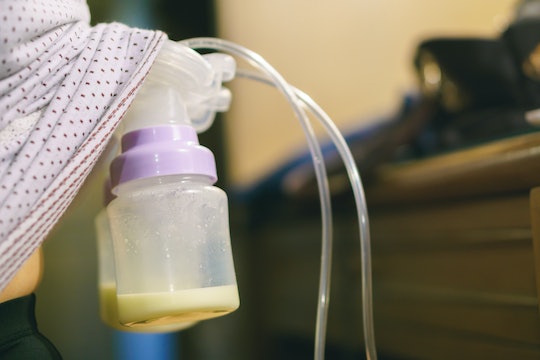 I Wasn’t Prepared To Pump At Work

When I first went back to work after my first two babies were born, I truly thought nothing was as horrible as leaving them at home. Yeah, I was wrong. While leaving them behind was difficult, I realized there's something far worse. In other words, there were things I wasn't prepared for the first time I pumped at work.

If you're anything like me, you had many things running through your head and heart the day you first went back to work postpartum. How much I was going to miss my new sweet pea was, of course, at the top of that list. I put the pumping material together mindlessly the night before, as if fully focusing on the task would speed up the act of leaving my baby. I didn't want to think about how it would be to pump at work for the first time, because that meant facing the complicated feelings surrounding wanting to go back to a job I loved, while simultaneously never wanting to leave my newborn.

After my first child was born I was working as a trauma therapist at a rape crisis center. I went back to work six weeks postpartum because I had no paid maternity leave. I had my own private therapy office and made my own client schedule. This made the at-work pumping awkwardness minimal. After my second child, however, I worked in a corporate cubicle environment. This means there were ample surprises the first time I pumped at work, including:

More Like This
Does Pumped Breast Milk Have Antibodies? Experts Weigh In
Gathre’s Winnie The Pooh Collection Is Finally Here
23 Sweet Quotes To Dedicate To Your Rainbow Baby
"Crybaby Ambulance" In Europe Will Help Exhausted Parents