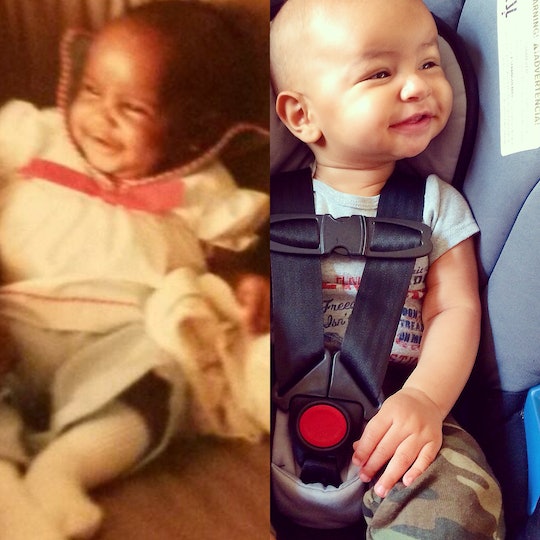 Months ago, I was exasperated while trying to change my squirmy son in a public bathroom when another mom looked over and gave me an understanding smile. Glancing back and forth between our faces, she suddenly gasped and smiled even wider. "Oh! He looks like you! I'm glad. It seems like we do all the hard work — pregnancy, childbirth, all that — yet these babies usually look like their daddies. I'm always happy when I see babies who look like their mamas!" Since then, I've realized there are many times you'll realize your kid is just like you, though many of them aren't nearly this pleasant.

Most of the time, my reminders that my son is just like me happen when he's hangry and freaking out, and makes me say a silent prayer for forgiveness from my parents and every restaurant server I've ever faced in a similar state. Or they happen when I'm trying to get us to do something my son doesn't give AF about (or even things he does care about, but doesn't realize we have to do some other thing first in order to get to it), and I'm forced to do battle with my very own stubbornness, in a tinier, cuter package. Or I'll be trying to get him to take a nap or go to bed, and realize that — though my usually boundless energy has been tempered a lot by having, nursing, and chasing after him — he has my same high energy, and my trademark ability to get by on the barest minimum of sleep so I can maximize the amount of time I spend indulging my insatiable curiosity (which he also shares) and desire to do as much as possible.

It's all good, though. Though it can occasionally be frustrating to see all your most challenging traits thrown back in your face, it's kind of a gift, too. Seeing my own little quirks through another person's eyes has helped me unpack them a bit. Having to deal with my stubborn son, and realize that some of the things he insists go a certain way can actually go a different way and work out to his benefit, helps me see that the same can be true in my own life. Sometimes.

I'll probably always be hangry, though.