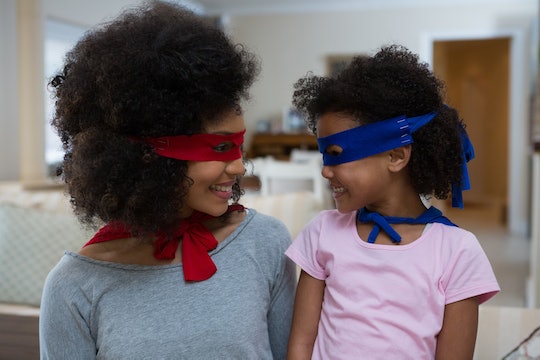 Any mother worthy of the title wants to be there for her children. I like to think that most mothers will, ultimately, stand by their children. But I know that's not always the case. And while the moniker "feminist" isn't some sort of virtue guard that keeps a parent from screwing up, I think there are important ways feminist moms have their kids' backs that, perhaps, others don't.

A lot of this ultimately boils down to the idea that feminists are, by nature, roundly suspicious of a number of societal norms. Not all societal norms, mind you. I mean, pretty much all the feminist I know are decidedly anti-puppy kicking and murder. I'm more talking about the societal norms that can't be explained by anything other than the sentence, "Well that's just the way it is," or those that hinge on the concept of shame in some way or another.

Now a lot of people, good people, have more of a "go with the flow" attitude about these aforementioned cultural norms. "Things are a certain way," they figure, "and society has held together more or less, so there must be a good reason for it all, right?" So when a child bumps against those norms, a lot of parents will take society's side. "Boys don't wear dresses." "Girls have to cover up their legs so that people don't get 'the wrong idea.'" "Don't rock the boat."

It's not always malevolent or villainous. Very often, these are acts of love (if misguided love), born of a desire to teach their child to fit in, learn respect for authority, and, in theory, be happy. This also isn't to say that feminist moms back their kids up in doing whatever the hell they want. We have boundaries just like everyone else. But we will have our children's back in some of these important moments: