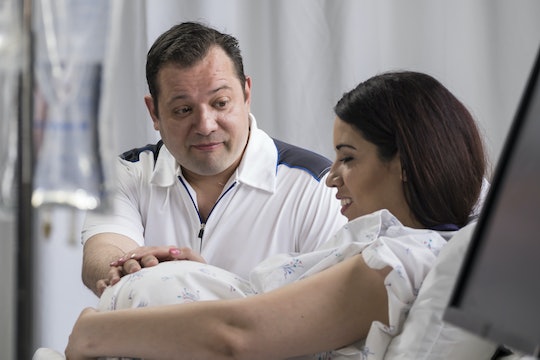 11 Things Every Grown-Ass Dad Automatically Does During The Golden Hour, Because This Isn't Rocket Science

If you're pregnant and staring childbirth in the face, chances are you've heard about the golden hour. It's the first hour after birth, when moms are encouraged to spend time bonding, feeding, and snuggling their newborns. But what about dads? After they support their partners during childbirth, are there things a dad automatically does during the golden hour, or should be doing if he wants to stay on top of things? The answer, of course, is yes. Just like a mom's job isn't done after labor and delivery, a dad's job isn't done either.

While most new dads are understandably excited to meet their babies, it can be argued that the golden hour is not for them. Their partner just spent months literally growing a human inside their body, and likely hours going through childbirth. They deserve a break, or at least an hour, to spend with their babies and not worry about anything else. And during that break, there are things dads can do to make the golden hour a magical experience. For example, my husband knew that I needed a little downtime with our baby, so he watched patiently as I got my snuggles in, tried breastfeeding, and basked in my love hormones, all before he asked to hold our newborn.

He also did a great job running interference with the nurses, especially when they wanted to move me to the postpartum wing well before I was ready. He took it upon himself to ask for some formula, too, so we could supplement. He took a billion pictures of our baby and me, which I will treasure forever, and only after I was ready did he take the baby off my hands so I could rest. Having a supportive partner during labor and delivery, and for the golden hour that came after, makes a huge difference, so partners should absolutely be doing the following for the first hour after birth, no questions asked.