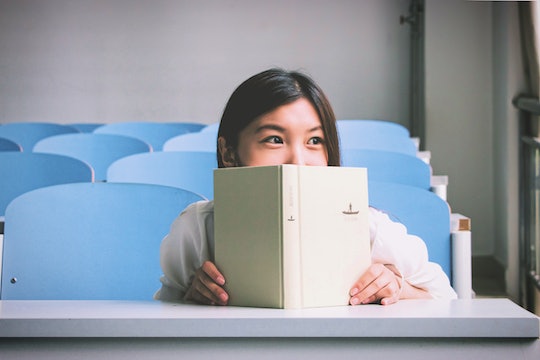 11 Things Every New Mom Thinks About Her Kid's First Teacher, But Doesn't Say Out Loud

Memories of meeting my own teachers for the first time as a kid are hazy recollections of colorful blazers, fluffy haircuts, and shoulder pads (it was the early ‘90s, don't judge). However, now that I’m on the other side, and meeting teachers as the parent and on behalf of my young kid, there is a lot more to it than simply saying, “She looks nice so I think I’m going to like her,” which is pretty much how I thought as a kid. Now I'm acutely aware that there are plenty of things that a new mom thinks about her kid’s first teacher, but doesn’t say out loud.

For the record, my kid’s school situation is technically daycare, but since it runs on a schedule consistent with the academic year, because his dad teaches, we have very strong back-to-school vibes in our house. So, you can be sure that meeting my kid's first teacher was a big deal. At the time, I wasn’t entirely sure what to expect, but I was hopeful, optimistic, and terrified. Leaving your kid in someone else's care (who also has to care for a number of other children, simultaneously) is no easy task.

Thankfully, she knew more about what she was doing than I did, and it was a fairly smooth transition, all things considering. Admittedly, while my mind was a waterfall of intense feels that weren’t forming completely clear thoughts, if I could revisit my thought process from that fateful September morning, I imagine it looked something like this: