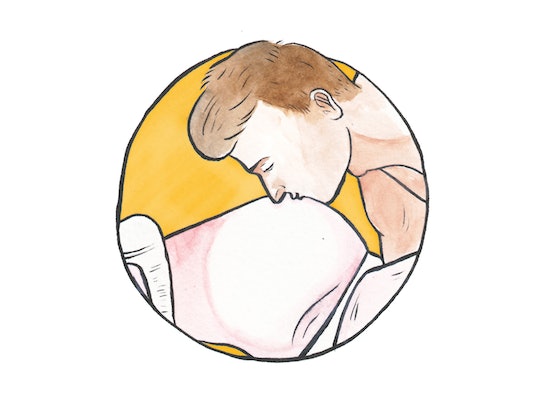 12 Reasons Pregnant Women Are Having The Most Amazing Sex

If you've ever been pregnant or had a partner who was, then you can attest to the pretty much universal idea that pregnant women have the best sex. Chalk it up to hormones, or blame it on those growing boobs make both of you feel more in the mood more often, but there is no shortage of reasons pregnant woman are amazing in bed. You may not have the hardest time finding a currently or formerly pregnant woman who feels totally turned off by the mere thought of a good sex romp, but that doesn't negate the many pregnant women who find a sort of temporary sexual peak while they're pregnant, especially during their second and third trimesters. It's definitely a thing.

I mean, I really can't blame those pregnant women who prefer to abstain. If my heartburn, acid reflux, and water retention toward the end of my pregnancy had been any worse, then I would have belonged to that camp too. But part of the reason why pregnant women have the best sex and are so amazing in bed is that being pregnant itself just makes you more confident, as strange as that might sound. My sister, who has two kids, has always said that during her pregnancies is when she felt the most comfortable with her body. There was no pressure to lose weight or strive for perfection, and she felt like her body was normal for once, growing just as it should, briefly (for her, anyway) free from most of the pressure placed on women's bodies.

And it makes perfect sense: We all know how confidence can be a turn on for yourself, never mind how appealing that could be to a partner. Whether it is more scientific than psychological, or vice versa, pregnant women have the best sex and they aren't afraid to get theirs. The reasons they are so amazing in bed are probably only a small portion of what they're worried about at the time, though. Pregnant women and sex have something pretty damn awesome going on.

More Like This
Fun, Sexy Maternity Lingerie, For When The Mood Strikes
Here's What Pregnant People Actually Want For Valentine's Day
Why Your Vagina May Be Itchy After Sex & What To Do About It
Meghan Trainor Shares Baby News After Dropping Hints On TikTok
What Parents Are Talking About — Delivered Straight To Your Inbox