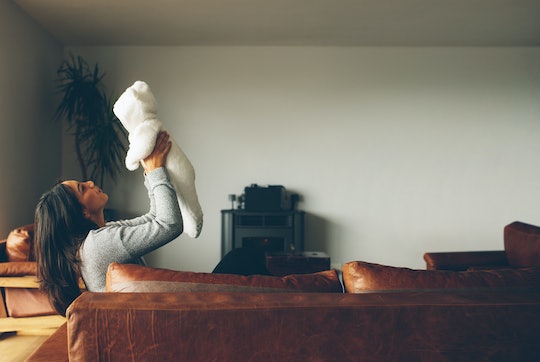 I'm fairy certain I became a mom the first time I saw my daughter on the ultrasound. Still, nine years later, I sometimes find myself shocked when a little person in my home calls me "mom." Me? Really? I'm the parent? The responsible person? How did this happen? More importantly, when did this happen? Every mom has a different defining moment when the fact that she's a mom actually hit her. For me, it was probably the first time my child actually refereed to me as "mom." It was a surreal moment; a moment that solidified this new role in my life and expanded the definition of who I was as a human being. I mean, it was exhilarating, and it was all bottled up into one word spoken by a tiny voice.

Although I was already a mom, the birth of my son, in a way, redefined my identity as a mother, too. I was now a mother of two, a boy and a girl, and once again my life had shifted and I was changed. I was now responsible for two totally different kids, who vary in their temperaments and in their personalities. Being a mother of two pushed my mom-identity into a whole new depth and arena, and I was, again, in awe of how everything was suddenly so different.

I guess I feel most like a mom when my kids aren't feeling well. When they wake up in the middle of the night with a fever or from a nightmare, when I nurse them back to health, and when I spend nights holding their hair as they vomit or giving them oatmeal baths when they have a rash, I know I'm the person they go to when they're in need. And I feel most like a mom when my kids cuddle up next to me on the couch and when they ask me to read them a story. And when I am ripping at the seams, trying to do 50 different things to be an individual, to be independent of my mom identity, and to concurrently be the best mom that ever lived. I feel most like a mom during the extreme and the seemingly insignificant moments of my life, and it turns out I'm not alone. Here's what other moms had to say about the moment they realized they were definitely someone else's parent, and, well, prepare yourself to get hit in the feels: