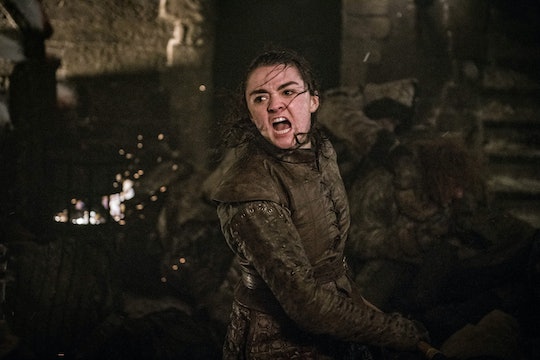 13 Signs Your Daughter Is Low-Key The Next Arya Stark

If you're not watching Game of Thrones, well, what are you even doing on the internet right now? This is a bold move, my friend, so turn back now before things get spoiled for you. But if you are caught up on the show, then let's talk Arya. Arya Stark. Arya. Motherlovin'. Stark. I am still screaming. I will forever be devoting myself to this small assassin. I see her everywhere and in everything... even in my own family. In fact, there are more than a few signs your daughter is the next Arya Stark, too, because the world needs more of them.

Arya has been a fan favorite since day one, and it's no surprise: she's smart, funny, and because she has no interest in what everyone else wants her to be she is only ever 100 percent herself. And, let's call out the elephant in the room: the fact that she's a Game of Thrones character that's made it through eight entire seasons (so far) is a damn miracle. Apparently, George R.R. Martin's wife has threatened to leave him if he kills Arya, her favorite character, and for all I know they're still together... but I don't trust anyone who can kill Ned Stark and dream up the likes of Ramsey Bolton, so I'm not uncrossing my fingers until the credits roll on the last episode.

Yep, the youngest Stark (at least now that Rickon Stark is dead because he didn't know to run away from Bolton in a serpentine pattern to avoid arrows) has a lot going for her and a lot that any little kid (especially a little girl) should emulate... and some things they probably shouldn't but are still badass in context.