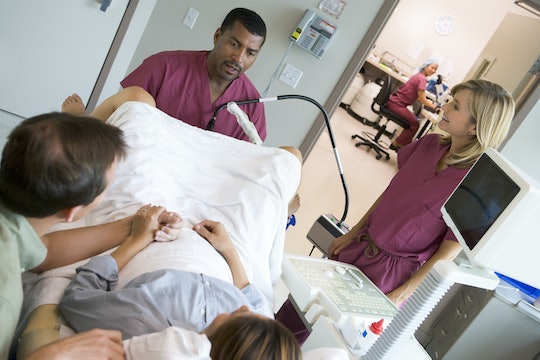 What Every Mom Thinks During A Vaginal Ultrasound

After the excitement and shock wore off following my first positive pregnancy test, I quickly made a doctor's appointment to confirm my pregnancy. I'm already such a good mom, I thought, following the instructions from the pregnancy test box. Once I'd peed in their cup — superior to peeing on a stick, apparently — and received a positive there, too, they scheduled me for a dating ultrasound at around eight weeks. That's how I know that one of the things every mom thinks when she's having a vaginal ultrasound is, "Uh. This is not at all what I was expecting."

In my head, I always imagined that the first time I saw my baby-to-be, my partner and I would excitedly embrace and maybe cry as we gazed at the image of the ultrasound tech captured with a nice, totally not gooey wand placed on my cute, ever-so-pregnant belly. Like the couples in literally every TV show and movie I'd ever watched, I expected to have a non-invasive exam whereupon I'd get to see an actual baby, pretty much immediately after getting a positive pregnancy test. Lies, lies, and more lies.

Now, I was aware of the existence of this totally not TV-friendly kind of ultrasound. I'd had a transvaginal ultrasound before, as a teenager when I unexpectedly landed in the emergency room with the worst period cramps I'd ever had, while I wasn't having my period. I guess that's why, in my mind, I classified vaginal ultrasounds as a thing that happened to non-pregnant female folk who landed in the emergency room because of ruptured ovarian cysts (or, you know, a stupid modern punishment dreamed up by Republican lawmakers trying to dissuade women from exercising our right to choose). But actually, they are just the thing you do when you want images of a pregnancy in it's earliest stages, because those pregnancies are still hella tiny and can't always be easily spotted through our bellies.

So when the ultrasound tech whipped out that big ol' vaginal probe, during my dating ultrasound, my second thought (OK, and first words out loud) was, "Maybe buy a girl dinner first?" Unfortunately, few strangers appreciate my #MomJokes, which is a total shame. (I am a master of crappy well-timed puns and other corny jokes. If I were a dad, this skill would finally get the eye-rolling, grudging respect it deserves.) Long story short: don't feel bad if you think any or all of the following during the vaginal ultrasounds that do happen during pregnancy. We've all thought the same thing.