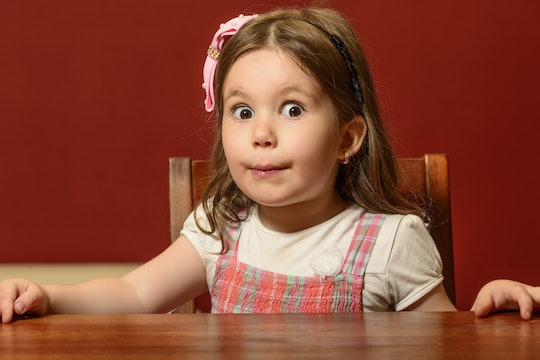 14 Kids Try To Explain Sex & Their Answers Are Hilarious

My daughter has always been curious. If she doesn't know something, she asks, and I always answer her questions in an age-appropriate way. I love it. Well, at least most of the the time. The other day she asked, "Alexa, where do babies come from?" and it made me pause. Alexa said that eggs and sperm joined, which she already knew, but wouldn't respond to her follow up question of, "How does sperm get into mommy?" So I asked her, "What do you think?" and was delighted by her hilarious and endearing explanations of sex.

According to my 8-year-old, sex is something that "daddies do to mommies in the bedroom, to put sperm in mommy's egg." She wasn't quite sure about the logistics or body parts involved, though. I confirmed her suspicions, but added that lots of people who can't have babies or don't want to have babies have sex, too, and that some people have sex with other people who are the same gender. She looked at me as if I had grown horns and asked why, so I responded by saying, "Because, it feels good" and had officially reached my limit for talking about sex with my third grade (at least until she's ready to learn more).

I asked some other parents I know to tell me what their kids think sex is, and their responses were funny, sweet, and occasionally confusing. I've learned that when kids don't know the right answer to something, they figure things out the best they can by filling in the blanks. Or they simply ask you, which can totally catch you by surprise, which (at least for me) usually catches you by surprise.

Read on for their kids' answers, which are sure to make you smile, laugh, (and maybe blush a little).