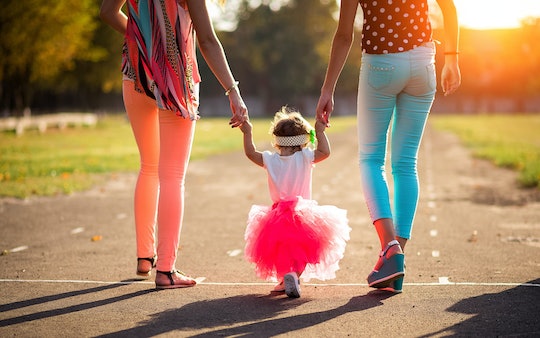 7 Reasons I Talk About Sex In Front Of My Kids

The other night, as our children played, my partner and I had a discussion about an essay I'd read. The premise claimed feminist consent culture has "ruined sex." (Ugh.) This prompted an animated, five minute discussion between us about everything we found problematic with that claim. While our kids — 2 and 5 — weren't involved in the conversation, they were right there and we did nothing to lower our voices or particularly censor our thoughts. In general, I've made it a point not to avoid talking about sex in front of my kids.

That's not to say I wax poetic about my personal sex life in front of my little ones (or, you know, anyone) or cavalierly leave pornography strewn about my home. I don't discuss graphic, hyper-sexualized material in front of them and I'm actually quite conservative in what I will allow them to be exposed to in movies and TV. However, when it comes to talking about sex in a matter-of-fact way? Well, I see no reason to shield my kids from the knowledge that sex is something that exists and isn't inappropriate or dangerous. M

Moreover, I think there is value in allowing sex to occupy a spot in the roster of "Things We Talk About In This House," which is why my partner and I have made it a deliberate personal policy for the following reasons: