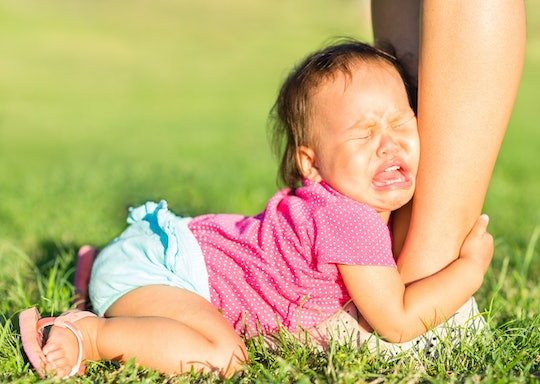 It happens to all of us at some point and, for most of us, it's going to happen far more than we'd like. I'm talking about tantrums — that perfectly normal, ultimately-short-lived phase that nevertheless makes parents around the world want to crawl into a hole and... not die but, like, maybe just not exist for a little while. It's bad enough when it's happening in the privacy of your own home, but when it's out in the world? With an audience of strangers? The worst. So you better believe there are things every mom thinks when her kid throws a tantrum in public. Things we're arguably better off keeping to ourselves, for better or for worse.

Every kid is different, of course, and tantrums may strike more or less frequently and at a variety of different ages and be well within the spectrum of what's considered "typical" behavior for your child. And most kids will (generally) stop having them with any regularity as they mature and learn how to cope with anger, sadness, disappointment, or being tired or hungry. After all, it takes time and a slew of learned experiences to learn how to deal with Big Feelings without screaming and crying. (I'm still working on it, to be honest. Just ask my husband.)

But even children of a more logical age can still sometimes give in to the siren's call of a temper tantrum. Mostly, however, we're talking toddlers. You know, those tiny, powerful, irrational, but oh-so-adorable creatures who know just what buttons to push. And in those moments, our internal monologue goes a little something like this: