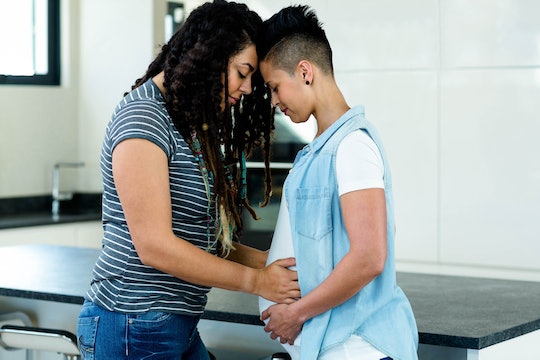 Few of us are our best selves when we're pregnant. We're tired; we're hormonal; we're uncomfortable; we're constantly either starving, on the verge of throwing up, or (for the least fortunate among us) both. So it stands to reason that pregnancy is a time when fights with your partner can not only be common, but absolutely absurd. I asked other moms to share the most ridiculous argument they had with their partner while pregnant because, while that stuff can be as serious as it is dangerous in the moment, in retrospect it's usually pretty hilarious.

Look, I'm not saying pregnancy gives the pregnant person in question carte blanche to be a nightmare for nine months. (Nor, partners of pregnant people, does it give you a pass to dismiss all their opinions and feelings for the next almost year as nothing more than "the hormones talking.") But on top of all the physical stuff going on, there's the stress (good and bad) of knowing that your life is going to change in a huge way, and very soon. That can cause tensions and emotions to run high which, in turn, can manifest in funny ways.

I actually didn't have any arguments with my husband when I was pregnant. But there was this one time when I got really, really upset with him because he didn't seem to be as moved as I was by the sight of a dead baby deer at the side of the road. In fact, he didn't seem to be moved by it at all. As I sobbed in the passenger's seat, I just wanted to scream, "What's wrong with you? Why aren't you crying?! Do you feel feelings, you monster?!"

Frankly, I don't even know if he saw the deer. I didn't ask him, but ignorance to the poor deer was no excuse not to be devastated according to my hormone-filled, pregnant mind. So what else do pregnant couples argue about? Spoilers: if this list is to believed, it's at least 65 percent food-related.