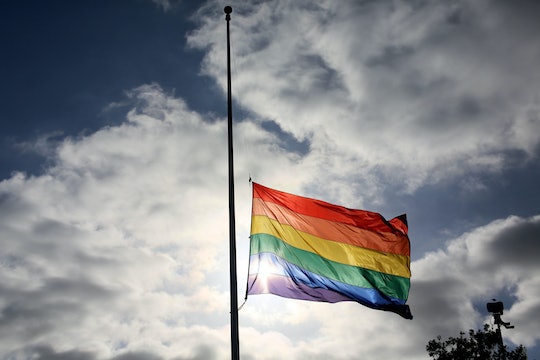 4 Ways To Support Same-Sex Parents, Because Marriage Equality Is Just The Start

One year ago on June 26, the Supreme Court of the United States made the final, definitive ruling that "love is love" and legalized same-sex marriage nationwide, ensuring that these unions would be recognized in all 50 states. It was a huge win for LGBT couples, believers of equality, and for humanity in general. Finally, the law of the land acknowledges that gay and lesbian couples are just as worthy of marriage and all the benefits it entails. Many of those couples are deciding to become parents, or did so long before the SCOTUS ruling. Now that marriage equality is a reality, it's worth focusing on some ways to support same-sex parents.

Same-sex couples can either use surrogates or sperm donors to have a child together, or they can adopt. Just as with any straight couple, the way they go about having their children, and their sexual orientation, do not dictate their potential to be good parents. Despite the widespread idea that children need to grow up with a married mother and father in order to succeed — a claim that's been discredited by science — a major obstacle that gay and lesbian parents oftentimes face is actually discrimination, and gaining acceptance from their neighbors.

There are lots of ways to make sure that all families in your community and country feel included and accepted.

As more and more same-sex couples marry and start families, the odds that their kids will end up in your kid's class at school or sports teams increase. It's important that kids understand that their classmates may come from all kinds of different families, and that all of these situations are equally legitimate.

In order to introduce kids to the concept of same-sex marriage and their friend's having two moms or two dads, there are lots of kid-friendly books to read together on the subject. From Leslea Newman's 1989 classic Heather Has Two Mommies to the more contemporary (and bafflingly controversial) And Tango Makes Three, which tells the story of two male penguins in a zoo with their own penguin egg to hatch, kid-friendly reading material can jumpstart conversations and help to make meeting same-sex parents no big deal.

Do Not Ask Offensive Questions

Meeting a gay couple with kids may still be somewhat of a novelty in some parts of the country in 2016, but it's imperative that those who are curious about how it all came to be simply zip it. Asking invasive, personal questions is never appropriate, and some questions gay parents have to field frequently challenge the validity of their families, even if the asker is well-intentioned.

For Parents magazine, L.A. Pintea wrote that lesbian moms do not want to deal with questions about who the biological mom is, who the sperm donor is, and whether their kids will miss out on "dad things." And Romper's own Margaret Wheeler-Johnson, who's a lesbian mom herself, had to deal with a particularly whacky incest question: "Since your donor was anonymous, aren’t you afraid your kid is going to accidentally have sex with one of his/her siblings, thereby unwittingly committing incest?"

Do yourself, and LGBT parents everywhere, a favor and just don't go there.

Speak Up About Representation In Pop Culture

Earlier this year, the hashtag #GiveElsaAGirlfriend blew up on Twitter, and for good reason. A teenager named Alexis Isabel Moncada had tweeted at Disney to make Elsa, the heroine of its wildly popular 2013 movie, Frozen, a lesbian in a sequel. The goal was to show kids that being gay is just as normal as Disney's typical heteronormative happily ever after.

Supporting efforts like this — or even cheering on what many thought to be a brief glimpse of a lesbian couple in this year's Disney Pixar film Finding Dory — is a great way to do a small part to help make the world a more equitable place for all kinds of relationship, little by little.

Although the culture wars continue, the data is in: According to a study from the Journal of Developmental Behavioral Pediatrics, there's absolutely no difference in children's general health, emotional difficulties, coping behavior, or learning behavior whether they're raised by same-sex or opposite-sex parents. So, same-sex parents are confronting the same challenges as every other couple with kids, and they're dealing with them just as well. Instead of asking them about the logistics of how they became parents, share tips on healthy snacks kids love, or tutoring services for a child struggling in math, or invite their kids over for a playdate. Because parenting is parenting.

When the SCOTUS anniversary rolls around, talk to kids about it. Don't forget to celebrate LGBT Pride Month. And while you're doing all that, keep LGBT parents in mind as we all work to make our schools, workplaces, churches, parks, gyms, etc, etc. more welcoming for them and their kids. Because at the end of the day, it's all about family.