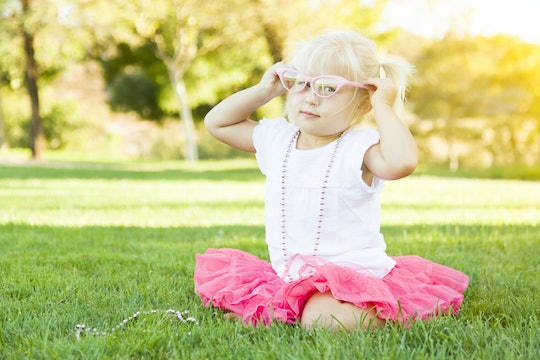 At my daughter’s age, I had already been on a self-imposed diet. It didn’t last long, but at 8 years old, I already got the sense that I was taking up too much space in the world. I was a little "chubby" but I was active with swimming, dancing, and riding my bike in good weather. I worry that my own daughter will start picking up on social cues that encourage dieting and other unhealthy behaviors; cues I am trying to combat with body positivity and self-love. Still, I fear that no matter how hard I try, I won't be able to fight against all the ways society is making our daughters hate their body.

For now, it seems like my daughter appears to have a healthy relationship with her body. She's also old enough to start paying attention (and understanding) society and its many messages. For example, recently she told me she only wants to wear leggings, because she likes things to fit tightly. (What?) We had bought a few small mirrors to arrange to make a full-length one, and instead she asked for them to be placed around the room so she could look at herself on every wall. (Excuse me?) She also asks to put on my make-up (which goes mostly untouched by me), use my hair product (which is pointless as 8-year-old girls have the most amazing, natural, healthy hair), or wear my clothes (especially the dresses, which she chastises me for rarely pulling out of my closet). I do not spend much time fussing over my appearance, especially in front of her, so can't help but wonder (and assume) where is she is learning these particular behaviors and, most importantly how bad they'll inevitably make her feel about herself and her body.

As moms, we are fiercely protective of our children, and that innate protectiveness definitely includes constantly registering common behavior in others that could have a profoundly negative impact on our kids’ self-esteem and body confidence. I’m always on the lookout for those potentially dangerous insistences, even if they don't seem like a "big deal" or, to others, appear like little things. When it comes to my daughter and the relationship she has with her body, I don't think I could ever be too careful.

Here are some little ways I’ve noticed that society could be making our daughters hate their bodies: