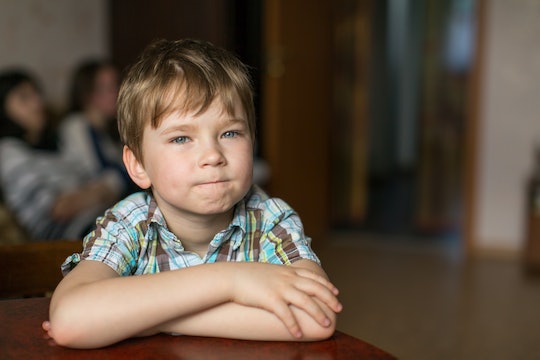 As the mother of a young boy and a pre-teen girl, I feel the weighted responsibility of teaching both of my children about rape culture. In a world where "boys will be boys" and victims of sexual assault are perpetually blamed for the violence they endured, I know it's important to facilitate conversations regarding sexual assault and consent immediately, directly, and often. I think there are things boys learn by age 5 that perpetuate rape culture, too, and I'm doing my best to dismantle them as they come. It's damn hard when outside forces are dead set on teaching my son otherwise, though, which is why I must remain stedfast in my resolve to raise a son that will dismantle a culture that normalizes systemic sexual violence against women.

My son has always been the literal light of my life. Born a rainbow baby after I endured two pregnancy losses, there hasn't been a day of his life that I haven't smiled in extreme gratitude for all he's given me. My son has provided me with ethereal, unwavering joy, hope, and the chance to be a mother for a second time. But the older he gets, the more pressure I feel to teach him about bodily autonomy and how, when someone says "no" or "stop" it means exactly no and exactly stop. Every day we go through the rules of consent, and every day it feels like we're back to square one. It's not like my son ignores the importance of asking for explicit permission before touching someone because he feels like it, or feels malice toward someone. And our straight-forward conversations get through to some extent. I know he is a child and he's learning. But it's because he's learning that I need to continue to teach these lessons over, and over, and over again. Because one of my biggest fears is that my son will dismiss the importance of consent when he's an adult.

As a soon-to-be 6 year old, my son is becoming increasingly curious about bodies — mainly the differences between his and mine. Lately he's had a fascination with "smacking" me on the rear, and it has me concerned. On one hand, he's barely out of toddlerhood, so he's exploring boundaries and learning what's right, what's wrong, and what he can get away with. On the other hand, he's violating my consent multiple times a day, harmless though it may be or seem, and by bedtime I'm at a loss as to what else I can possibly do or say to help him understand that touching someone without their permission is not OK.

The sad truth is that rape culture is everywhere, and probably in my own house, despite my attempts to teach my children otherwise. It makes itself known when I talk to my children about bodies or consent, sex. I feel it when I hear my children discuss what they overhear at home, school, or on television. My son is young, and I know he means no harm, but if don't instill in him the need to always seek out consent? Well, thinking of how he could act in the future is unbearable. I owe it to him, and his sister, to seriously reflect on how the things he's learned perpetuates rape culture, so I can fix it. Now.