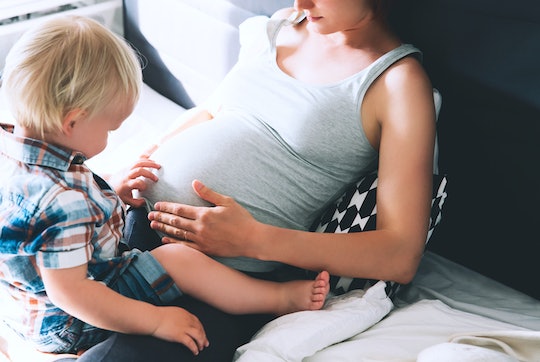 How I Set Myself Up For Success When Preparing For Baby No. 2

The moment I found out I was pregnant with my second child, I panicked. I wanted another baby so badly, but life with my feisty toddler was difficult and constantly changing and I had no idea what new challenges having a family of four would bring. I knew that if I wanted to be a good mom to two children I needed a solid plan; something I could rely on when the you-know-what hit the fan. Thankfully, I learned there are ways you can prepare for a second child that will set you up for success.

I'm no stranger to routines and schedules. Because I live with obsessive compulsive disorder (OCD), I rely on carefully crafted plans to function and feel comfortable as I navigate my daily life and the plethora of responsibilities that come with it. As a result, my oldest was raised on my detailed schedules and routines which, turns out, is a good thing when you're preparing for a second kid. Not only has my oldest always been on a solid, reliable sleep schedule, but by the time my partner and I brought her little brother home from the hospital she was able to adjust from one schedule to another, as long as it was explained to her and we allowed her time to adjust.

Whether you're having your second child or your sixth, things are going to change when you add another kid to the fold. And while even the most carefully crafted parenting plans can end up getting thrown out the proverbial window, I have learned that there are a few things you can do to set yourself up for parenting success as a mom of two. So with that in mind, here's how I prepped for the birth of my second kid that turned out to be beneficial: