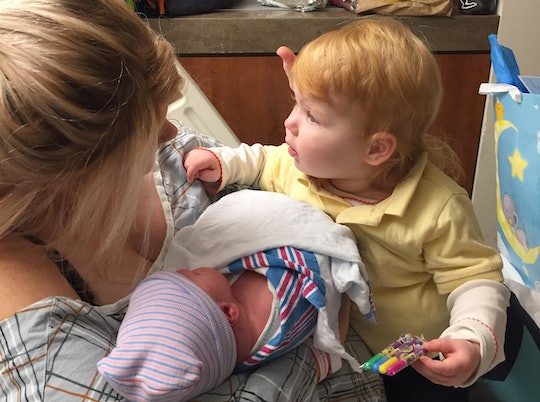 Everything To Know About Having A Second Child

My daughter was the product of disciplined period-mapping and results-driven sex. We procured her like a homemade loaf of sourdough in my babymaker, measuring and scooping and planning for her creation. In contrast, we didn’t even detect the existence of my son until I was already nine weeks along. My daughter was ten months old and I still hadn’t gotten my period back. We weren’t, you know, trying. We were "not not trying." Feeling a bit woozy, I took a pregnancy test and there it was, my son already littering HCG around my body like the toast corners he now likes to hide around the living room. Ever mischievous, he had seemingly loaded the raw ingredients into the catapult and shot himself into existence. Six months after my daughter’s first birthday, there he was in his little hat, taking up space in my arms while she looked on, stunned, holding a banana.

Your first baby is a miracle: they up-end your world, explode your heart, speed up time. Your second child is a miracle too, only this time you know better than to bring Lululemon leggings to the hospital for their arrival, if you happen to be gestating them yourself. This time, you have thoughts on sleep and feeding. You’ve made mistakes, which you will now attempt to rectify.

It is a do-over, yet there is no going back — and we explore it all in Here We Go Again, Romper’s look at second babies, which I am sure you will agree has come along ~not a moment too soon~.

There were many lessons from my first child. For example, I knew the OB-GYN present at my first birth, who yelled at my vulva to “hurry up, I have to be in office hours in 15 minutes!” after three hours of crowning, would not be present at my second. Likewise, instead of having my parents fly over to the U.S. to wait out the birth and spend another two weeks watching me oscillate through my one-woman play of postpartum moods, I told them to just sit tight, and booked tickets to Australia for me, my husband, my daughter, and BABY MANLEY (lap infant, unborn) for eight weeks postpartum. (Have you ever tried to get a passport photo taken for a baby still learning to balance its head on its torso? You must.)

As you know, the birth is really just the prelude.

One of the “action items” my husband took away from our first delivery was to shower before we headed to the hospital, lest he go three days without bathing again. That he chose to take this shower while my uterus worked to expel our second baby out on the curb by the Uber is something I will hold over his head forever.

Your second baby raises new, exciting questions like “where will I put this baby?” and “what do I do with my other child while I’m having this one?” For many of us, the endeavor is less about birthing balls and more about better preparing ourselves mentally for pregnancy and postpartum (something author Kate Rope has buttoned down in her ultimate prep guide). Perhaps you're looking at adoption the second time around, or perhaps you're thinking about tandem nursing.

To some extent it is simply 'we're going to need a bigger stroller!'

Maybe your second is coming hot on the heels of your first (you don't need to get your period back to get pregnant!). Maybe you aren't sure whether to have another, and just want to hear from some moms on the far side of the equation — dig into what it really costs.

Having your first child is life-changing, goes the saying, and having a second is merely game-changing. And to some extent it is simply "we're going to need a bigger stroller!" (we got the BabyTrend Sit 'N' Stand because it was about $500 cheaper than the competition, u welcome), but the decision to have a second child is arguably more monumental than the first. The first time, it's all hypothetical. You have no idea that, two years hence, you'll have a small person in your lives who insists on sleeping with a yellow spatula and eating all his meals standing up at the table.

You think: Ah yes, me holding a baby in my linens.

You don't think: Me reading Go Dog Go 278 times as a tiny helium-voiced tot recites it in my lap and I fixate on my mortality.

There isn't the same hubris on your second visit to the cabbage patch. You know asking for babies is incredible dark magic, and worry you are demanding too much of the universe. At the same time you fret that you are ruining your first child’s life forever. (You aren't.)

I love telling my second birth story: we bumped along in gridlock traffic over the Brooklyn Bridge, me turned sideways under my seatbelt, screaming as I focused on the Eye of Sauron (my "focal point"), an architectural flourish on a city building over the river. The two of us entered the hospital with all the cool of an Improv Everywhere troupe, my husband yelling for a wheelchair as I stood crippled by contractions, hollering like an angry whale. They rushed me up to the delivery ward where I wound up frozen over the toilet trying to get my pants off. "No! Don't push here!" screeched a nurse, helping me to the bed. Japhy was a "precipitous delivery," shot from my babymaker less than 20 minutes after my claws left the Uber, unaided by medication because I wasn't in the hospital system yet.

A fun story, but as you know, the birth is really just the prelude.

It is everything that has come after that is the stuff of it — my toddlers fighting over who gets to TAKE OUT MY BONES, the revelation of two people who weren't here before interacting and poking each other's belly buttons and saying "love you" with their squeaky little mouths as they turn toward separate bedrooms at night.

Having a baby is a hell of a magic trick — we literally rewire our brains, build little houses for our children in our hearts — and I still struggle to comprehend it, even as a mum twice over.

Second kids aren't in the cards for everyone; they are a wild, expensive privilege, a fluke that will shear your sleep into tinier pieces and change you profoundly a second time. But if you are so lucky to have a second, you'll be glad you loaded yourself into that catapult, ready to blast off again.