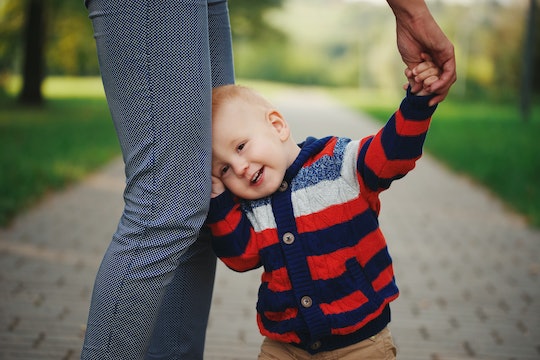 7 Creepy Things People Have Said To My Son... Right In Front Of Me

I first started paying attention to the things people said around children after I had my daughter. She'd be on the receiving end of those "aren't you a little princess?" comments that made my skin crawl. At first, I didn't really understand why I was so unnerved by such statements, but later realized it's because such remarks perpetuated gender stereotypes I was trying to avoid. Then, after my second child was born, I was forced to confront the creepy things people said to my son, often times right in front of me. Every single remark would ricochet through my nerves and hit me straight in the gut. Every single remark also made me more determined to fight against these messages than ever before.

They say people learn from their mistakes, and that older generally means wiser. I don't know if I've become wiser with age, but I'm definitely more aware of my language and how my words affect those around me. I used to be somewhat careless about the things I said to or around people. I figured most of the things I said were harmless, timeless adages; you know, silly humorous idioms of sorts. Then, as I learned more about the world and its people, I realized that much of what I said was not at all harmless. Much of what I used to say was actually ridiculously biased and deeply rooted in gender stereotypes and gender roles.

I know most of the things we say to kids are in the moment. As adults, we think it and then we say it. But what many people don't realize is that words have lasting effects, and mean more than we realize. These comments, that people have said to or about my son, aren't inherently malicious. These people aren't trying to be horrible people, they just don't realize that their words carry a deep connotation that may be rooted in patriarchy. And in order to fight that patriarchy, people need to pay attention to what they say to impressionable children. So with that in mind, here's what a few people have said to my son, right in front of me, that only perpetuate toxic masculinity and outdated stereotypes we'd all be better off without: