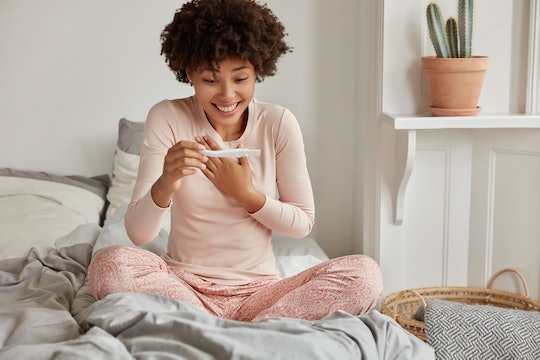 7 Things That Can Predict What Your Pregnancy Will Be Like

I found out I was pregnant when I was approximately three weeks along. Long story short, I was eating one of my all-time favorite meals at my go-to restuarant, when I had the sudden urge to vomit. I quickly ran to the bathroom and spent 30 minutes throwing up. Not only was that bout of extreme nausea a sign I was pregnant, it was, unbeknownst to me, a way for me to predict how my pregnancy was going to go for the next 37 (give or take) weeks.

Throwing up my favorite meal turned out to be one of hundreds — yes, I actually mean hundreds — of vomiting sessions I’d endure while pregnant. At one point I was even hospitalized and later diagnosed with hyperemesis gravidarum (HG) — an extreme and severe form of nausea and vomiting during pregnancy, according to the ACOG. That first vomiting session wasn't just a sign of pregnancy; it was a sign of HG, something that impacted me the entire time I was growing another human being inside my body.

Now, just because I ended up having HG doesn't mean any nausea or vomiting in early pregnancy is a definite sign you'll end up experiencing HG, too. Pregnancy can be unpredictable in a variety of ways, and no two people or pregnancies are the same. But there are some things that can help you at least guess what your pregnancy will be like, in certain respects. Romper spoke with Dr. Brooke Vandermolen, M.D., a National Health Service (NHS) doctor currently working and training in Obstetrics and Gynecology, to help us all better understand how we can predict our pregnancies, so we're not caught off guard by the wild ride that is gestation: