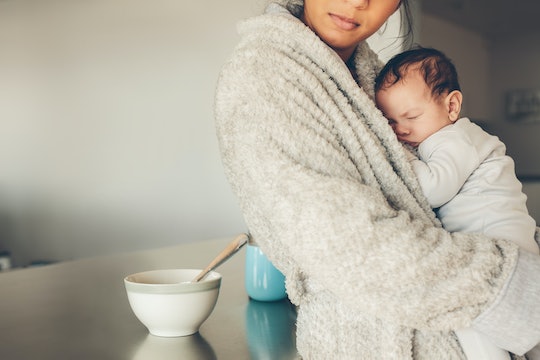 My daughter did not want to leave the cozy abode I created for her. After a week past her due date, the doctors decided it was time to induce. I spent 15 hours in labor, and almost three hours actively pushing, until I was finally able to meet my baby girl. Excited and nervous, I cradled her in my arms and promised I would never let go. Now my daughter is almost 9, and I'm still in shock that I made it through the 30 days of motherhood. Because honestly, the first month of motherhood is definitely the hardest several weeks if parenting I've ever had. To be fair, the first few weeks of motherhood isn't really parenting: it was survival.

The first month of motherhood was probably the most difficult few weeks I've had in my entire life. Sure, every parenting milestone has its own hardships, but those first few weeks are unlike any other. The constant struggle of dealing with a newborn, especially one like mine, was not only intense, but shocking. No one could have even set my expectation for what it was ultimately like. I, like most new moms, was thrown into completely unfamiliar territory of life and had to fight my way through and out.

The first 30 days was like a fight for survival, and while I definitely volunteered as tribune, I didn't feel like I was adequately prepared to go up against sleep deprivation, breastfeeding struggles, and a baby that hates sleep. If my life were a novel, I'd be the protagonist versus the world. And in the story of my life, those few months were my storm. A dark, powerful, damaging storm. Luckily, we all made it out alive, barely scathed and much stronger for it. With that in mind, and because it pays to be even slightly prepared, here's why the first 30 days of motherhood are the most difficult to endure: