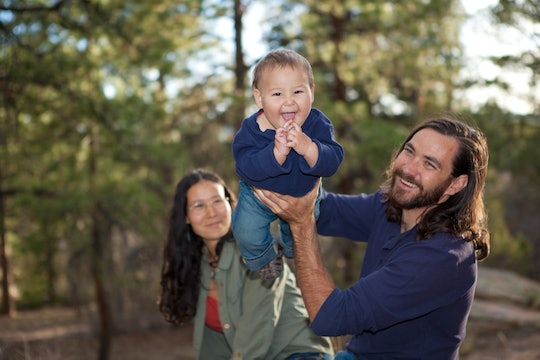 Dating as a single parent can be a disaster, especially when you're looking for more than just a casual hook-up. That's why I was more than a little surprised when my first date with my now-husband was the best first date I'd ever been on. But even though we were completely honest with each other about our priorities, I wasn’t completely sure that he was “the one” at first. I mean, how does a single mom know they've found a parenting partner?

While I didn't know immediately, it didn't take me long to realize that I was going to marry the man sitting across from me on that first date. In fact, it was during one of the first times we hung out together with all four of our kids, as two families. I made dinner — spaghetti — and totally burnt the garlic toast. He didn't miss a beat, though, and ended up throwing the bread on the lawn for the birds and suggesting a walk to the playground. As I watched him push our kids on the merry-go-round, and swings, and give like 100 piggyback rides, I thought to myself, "I can really do this." I was so surprised to realize that I might actually be a parent with someone, and in a way that was never possible with my ex.

Blending our families together has been a wild ride. And while we're far from perfect, there have been hundreds of moments that remind me that I I made the right choice. I asked other single moms and formerly single moms (including my own) to share what that moment of clarity looked and felt like for them. Grab some tissues and prepare to ugly cry before you read on, my friends:

More Like This
The Best Travel Tips For Solo Parenting
When Does A Baby Recognize Their Father? A Pediatrician Explains
What To Do If Your Toddler Keeps Taking Off Their Diaper At Night
How To Talk About Sex With Your Partner
What Parents Are Talking About — Delivered Straight To Your Inbox