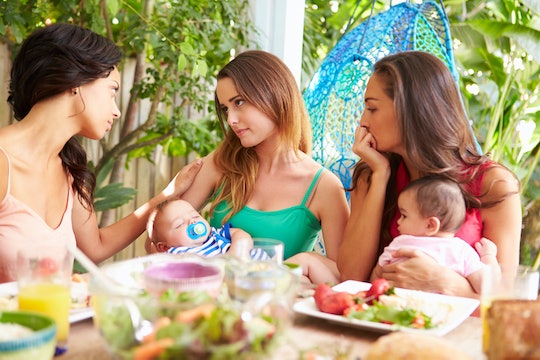 8 Friends Every New Mom Can Do Without

Becoming a mother changes your life in almost every conceivable way. In my opinion, when you're going through such an upheaval you really need close friends around you. Being able to vent any frustrations you may have about your new parenting role, to someone you trust, can be the difference between feeling supported and feeling totally alone. However, and even though our friendships can sustain us as we become parents, there are some friends every new mom can do without.

When I became a mom I made a lot of new friends from a local birth group. All our babies were born in the same month and these women were fierce, independent, strong role models. Over the last four years, they've helped and supported me in every stage of my son's development, whether I was pregnant or when I was postpartum. Unfortunately, I did encounter at least one "bad friend" that actually had to be eliminated from my life. If I hadn't distanced myself from her, I'm convinced I would've turned into a total nervous wreck. She made me constantly question myself and my parenting choices, until I wasn't even sure what my own beliefs or views were. Once I ended communication with her, I felt nothing but relief. Like a bad breakup, the proof of my decision was that it hurt less to be without her, than it hurt to be with her.

There are a variety of friends that are best avoided once you become a parent. The end of a friendship doesn't mean that friendship was useless or unnecessary or even failed in some fundamental way. It simply means the relationship has ran its course, is no longer fulfilling for both parties involved, and it's best you both go your separate ways. So, if you have someone in our life that fits one (or all) of the following descriptions, you might want to consider a change in friendship.