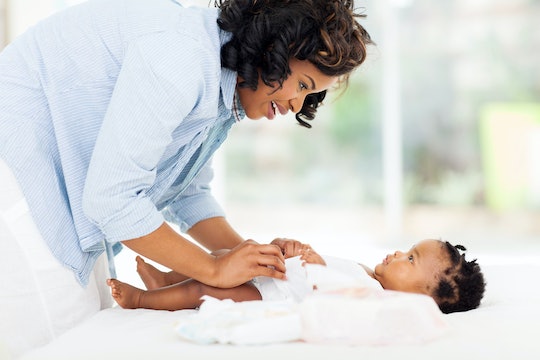 Changing a diaper can get pretty disgusting pretty quickly. Of course, I probably don't need to tell you that. The pure thought of cleaning up someone else's feces and wiping someone else's butt has the potential to evoke some disgusting images, right? As a mother, I can tell you the reality, my friends, is even worse. There are so many gross things that happen when you change a diaper but, as a parent, you tend to get over and learn to live with it and, in other words, consider those gross things to be relatively "normal."

While most (I promise, most) diaper changes are relatively painless, especially after you get the hang of it, there are times when the exact opposite is true. I've experienced some situations in which I inevitably think to myself, "Why did I think I could to this by myself? I should call my partner in as a reinforcement because, if I don't, this is going to get everywhere." Still, being the independent person I am, I usually go ahead and change that disaster of a diaper anyways and yes, you guessed it, the mess gets everywhere. Like I said, I don't expect a mess every single time, but when my daughter is teething or has just had another round of vaccinations, I consider the changing of the diaper to be a two-person job.

In the end, of course, it all becomes relatively and just another weird part of parenting that morphs into a part of your normal, every day life. Plus, the following gross things that will inevitably happen when you change your kid's diaper are all the more reason to look forward to potty training, right?

More Like This
12 Genius Floats With Canopies (& Cupholders), So You Never Have To Leave The Pool
Here’s What You Need To Know About That Viral 1960s Baby Formula “Recipe”
Ashley Graham On The “Fun, Organized Chaos” Of Raising Twins
These Stepmother's Day Instagram Captions Are Straight From The Heart