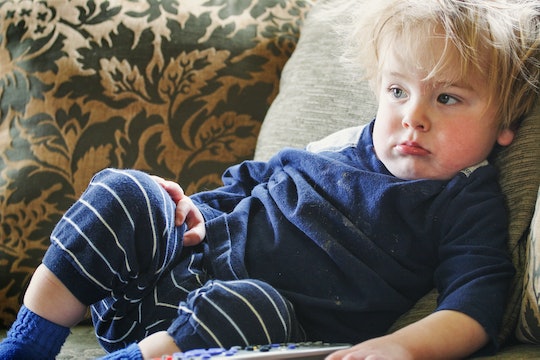 In college I minored in Film Studies, a degree many would dismiss as useless. But I've loved movies my entire life, so I genuinely enjoyed studying them. It was, however, less-than-pleasant to go to the movies with me, only because I provided unsolicited commentary on everything. For one of my last film courses, I wrote my final paper about the sexism in Disney's fairy tales, long before I was familiar with toxic masculinity. Now, as I watch movies with my kids, I cringe. Turns out, a lot of children's movies that perpetuate toxic masculinity. Bummer.

Lately, watching television shows and movies with my kids has proven to be more difficult than ever. Once I started paying attention to all of the messaging about gender roles, I now see issues and problems everywhere. I mean, how blind could I have been? The answer, unfortunately, is very. In college, I realized how problematic children's fairy tales were (and still are). Now, as an adult, I have come to understand how problematic most media messaging is in general. Sure, it may have taken me longer than others to get "woke," so to speak, but as the old adage goes: better late than never.

Truth be told, I am sometimes miss the days when I could blindly watch movies and shows without feeling nauseated by the deeply rooted sexism, toxic masculinity, and hyper-femininity. Now, I sit by my daughter when she is watching something and partake in something I've dubbed as "active viewing." I comment throughout the show or movie, explaining to her what is wrong with each stereotype and message. It's obviously annoying to her, but I believe that is my responsibility as an adult. This way, she won't grow up quite as blind as I was. So with that in mind, and because dissecting the messages we receive on a daily basis is always a good thing, here are some problematic kid movies that deserve a healthy dose of scrutiny:

More Like This
Here’s How To Keep Your Baby Safe When Their Older Sibling Is Sick
Can Elderberry Help Prevent Illness In Kids? Doctors Weigh In
What Is RSV?
6 Hacks To Make Your Kid's Lingering Cough Go Away