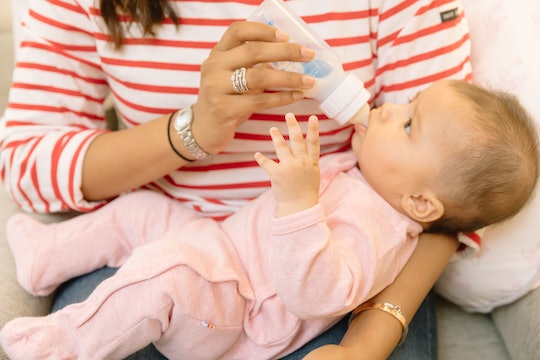 When my daughter was 11-months-old, my breast milk supply couldn’t keep up with her demand. Though she was eating solids, she was still taking several bottles of pumped milk during the day, while I was at work, and nursing at night. And while she was right around the age when our pediatrician said it would be safe to start transitioning her to cow’s milk, I wanted her to make it to a full year before that happened. But as a breastfeeding mom starting to use formula, I was terrified of how my baby would react to this change, and how others would react to my decision.

As someone who didn’t start out with a ton of confidence, I was often second-guessing my decisions as a new mom. While I did try to listen to my gut, and conferred with my husband (who is thankfully pragmatic about most things) I rarely felt rock solid in my choices as I navigated my way through parenthood. As time went on, and I learned from my successes (and failures), I became more self-assured. But introducing formula to my baby, when we were having such a successful breastfeeding run, made me anxious.

I’m sure there are moms out there with much more chill than me and, as a result of their innate chillness, wouldn’t have been so worried about transitioning to formula. But I had never done this whole parenting thing before, and I had never used formula. I didn’t know if it would go well or become a nightmare. And worse, I was afraid to talk to others about it, for fear of judgment of being shamed for my choices. I have to wonder when society is going to stop asking moms to operate from a point of apology.

Until we can coast through parenthood without fear of being relentlessly judged, though, here are some of the cruelest things I think you could do to a breastfeeding mom just starting to use formula… you know… to keep her child healthy: