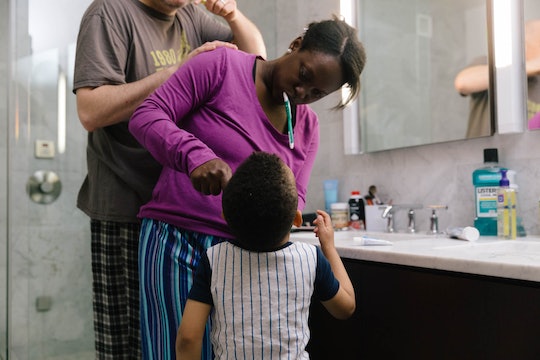 I waited until I was 30 to have kids, mostly because I wanted to have my sh*t together before I became a mom. And I did, at least by "child-free me" standards. I thought I knew how to be an adult and do adult things competently. Then I had kids and realized that being a competent adult and being a competent adult with kids are two entirely different things. There are so many things I thought I knew how to do, and then I became a parent.

You see, when people say that everything changes when you become a parent they aren’t lying. Turns out, one tiny human makes a huge difference when it comes to major things like your career, and also seemingly simple tasks like doing the laundry or keeping your house clean or, you know, sleeping. I used to be so good at sleeping. Now I can't fall asleep at night, wake at every sound, lie awake replaying every hot mess moment from my day, and can't nap even when I have the opportunity.

To make matters worse, I was one of those annoying child-free people who thought I knew everything there was to know about being being a mom. When I was pregnant I read books, took classes, joined internet mom groups, and was annoyingly confident about my choices. Until, that is, I brought a baby home from the hospital. Everything from breastfeeding to baby getting some damn sleep is so much harder and different than I thought it would be. I had no idea.

So, yeah, I should be way better at this than I am, and I totally have no idea how I got here. Help.

More Like This
What Is RSV?
Experts Explain Whether It’s Safe For Your Baby To Sleep On Your Chest
Zaya Wade Is Rocking New Long Hair & As Gabrielle Union Put It, She's A "Vision"
Introducing My Boyfriend To My Kid