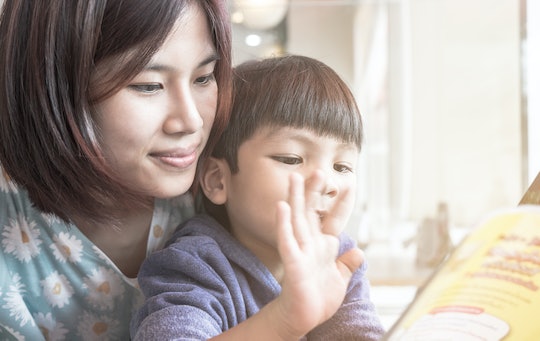 8 Times My Toddler Son Has Actually Mansplained Me

Putting up with idiotic and patronizing mansplaining comments is often part and parcel of daily life for modern women. Honestly, and rather sadly, I guess I've grown used to it over the years. However, I didn't expect to find myself falling prey to mansplaining in my own home. Thanks to my son's enormous toddler ego, however, my 3 year old old thinks he's smarter than me. The times my toddler son has actually mansplained me range from the hilarious to the side-eye worthy, so unlike other mansplaining situations I'm forced to deal with in the "real world," at least I can laugh when my son does it.

I take solace in the fact that my darling boy isn't sexist, he's just a kid. He gets to hang his hat on the excuse that he's a toddler who doesn't know better, especially when he not only treats me like an ignoramus, but literally everyone he encounters. He'll roll his eyes at your ignorance, then slowly and carefully explain the world to you (as he sees it, of course). What confidence he must possess, to imagine he is already the most intelligent being alive. I have to get me some of that self-esteem, you guys.

Back when I was a class teacher, I once got into an argument with a 4-year-old child in my class who swore dolphins were a type of whale. I tried gently correcting him, pointing to my years of experience on Earth as evidence of my superior knowledge and even employing a colleague to back me up. Still, my young student stuck to his guns. One not-so-smug Google search later and I was apologizing profusely; it turns out dolphins are indeed a type of whale. Who knew, right? Well it turns out a 4-year-old toddler knew. I guess sometimes we all need a little 'kidsplaining,' like these important lessons my son taught me: