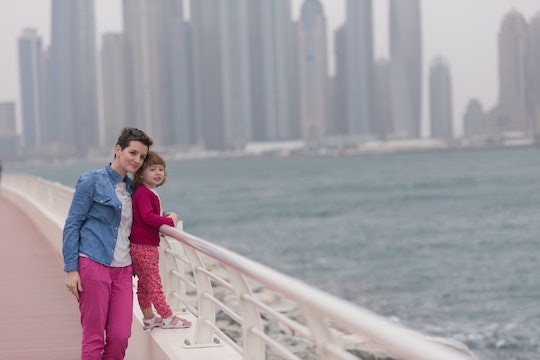 I was born and raised in England's beautiful and bustling capital city of London. I love London as if it was a person, and after living across the Atlantic ocean and far from my hometown for the last decade, I've realized absence really does make the heart grow fonder. My appreciation for my favorite urban hub has only increased over the years and since I became a mom, too. In fact, there are so many ways growing up in a big city changed the way I parent for better, for worse, and in ways that are both predictable and unexpected.

I lived in London for the majority of my life and until I got married and relocated to Canada. Although I moved to another capital city that, by all accounts, is large in terms of population, the number of people living in my current home is significantly less than the estimated 8.674 million people who call London home. So, honestly, at first I found my new home to be quiet and boring by comparison. (Although, I must admit that, in time, I really have grown to appreciate a smaller city.) Now that I'm a mom, I hope my son grows up experiencing something of a "middle ground." I think there's something to be said for enjoying all the resources and amenities a city can offer, while still living close enough to a vast wilderness that affords a certain level of freedom.

Still, and regardless of where my family ends up next or where my son grows to love living, I know the lessons I learned from growing up in a big city will never leave me. The ways in which they impact my parenting on a regular basis have truly made me thankful for the childhood I was privileged enough to enjoy.