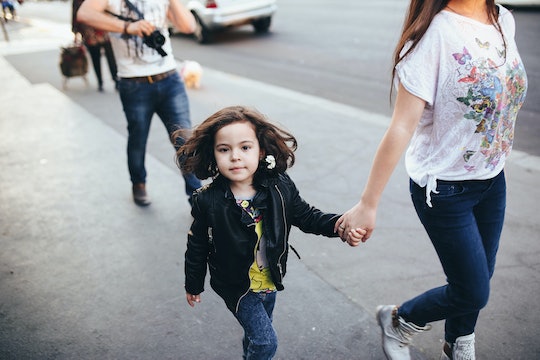 9 Creepy Things People Have Said To My Kids, Right In Front Of Me

Every day I'm grateful that my children are surrounded by so many loving and wonderful family members, friends, teachers, neighbors, and folks in the community. They are helping form my son and daughter into sweet, thoughtful people with strong values and a secure sense of identity. But even wonderful people are imperfect, and the creepy things people have said to my kids, literally right in front of me, have occasionally left me blinking in confusion or seething in quiet (or not quiet) rage.

Most of the creepy things on this list don't mean to be creepy. It's just that society in general is so tremendously awful sometimes that people don't necessarily notice when they're enforcing something unnecessary, damaging, and potentially problematic. The things we are invested in, even without realizing it, are creepy.

I also don't want to sit haughtily on an ornate throne of judgement looking down on people. I mean, OK, sometimes that's exactly what I want (I'm human, damn it!), but what I mean to say is that I don't exempt myself from ever having been creepy. I'm absolutely positive I've said things to people, including other people's kids, that have made someone think, "That was a little bit weird." We all do it. What is humanity if not a vast sea of different kinds of blundering awkwardness? With that in mind, here are some of the (generally unintentional) unsettling things people have said to my children: