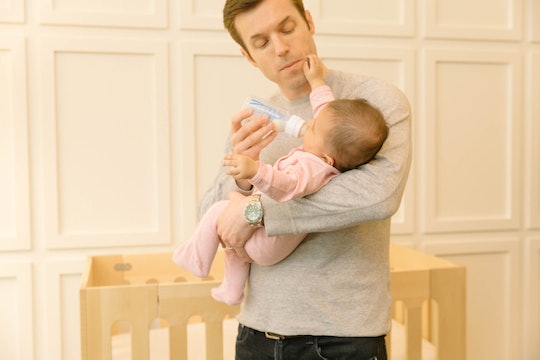 Discussions about feeding babies are almost always centered around moms and their choice (or ability) to breastfeed or formula-feed. Like so many other parts of parenting, we don't really talk about the role dads can play, and we certainly don't ask them how they feel about. I think we should, though, so I had a few dads reveal what it's like to feed their babies for the first time.

I had always planned to breastfeed my daughter exclusively, so having her dad feed her was never a part of my pre-parenthood planning. But, you know, life happened. I suffered from undersupply, so we needed to supplement with formula. The first time I watched my partner feed our baby it felt like failure. In fact, I cried. Eventually, however, watching him give her a bottle felt more like freedom. When my husband and I first talked about how we'd feed our newest baby, he told me that he would support me no matter what I decided, but also that he wanted to play a part in feeding our baby, because it was something he really loved. I had no idea.

Turns out, dads have some of the same feelings about feeding their babies as, I think, most moms do — feelings like peace, joy, love, fear, frustration, relief — they just don't have as many chances to tell their stories because people rarely ask. Read on for a few of them, and maybe grab some tissues, because they are seriously so damn sweet.

More Like This
The Best Travel Tips For Solo Parenting
These 72 Instagram Captions Are Perfect For Your Snow Day Pics
Even If Your Baby Sleeps Better in Your Bed, It’s Still Not Recommended
When Does A Baby Recognize Their Father? A Pediatrician Explains
What Parents Are Talking About — Delivered Straight To Your Inbox