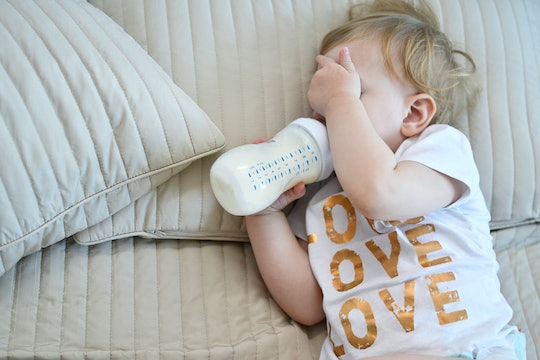 9 Things I Got Wrong About Formula

To say I never planned to formula-feed my babies is a huge understatement. As a new mom I was adamant that they never receive even a drop of formula. I planned to exclusively breastfeed, wean them when they were ready, and avoid formula altogether. Then I learned that how you plan to feed your baby and how you actually feed your baby are two entirely different things. I also learned that there were so many things I got wrong about formula before I ended up using it to help my babies thrive.

As someone who had always planned to breastfeed, I didn't learn a thing about formula-feeding ahead of time. When I was mixing my first bottle I had so many misconceptions about formula that I was legitimately scared that what I was going to give my baby would eventually hurt her. I was also exhausted, so I had no idea what I was doing. There was also a general lack of information available to formula-feeding parents, so while I was willfully naive I was also at a loss as to where to even find the information I needed. Sadly, the internet wasn't much help, either. Almost every site I visited told me how important it was to breastfeed, and the rest tried to sell me their brand of infant formula as "the next best thing." I was exhausted, I was in over my head, and I was lost.

I also think that in a well-intentioned attempt to promote breastfeeding, formula has been demonized as a result. I mean, I have always thought that formula was something "lazy" moms used — like the fast food of infant-feeding. So, I was going to commit myself 100 percent to breastfeeding and give my babies that "liquid gold" not only because it's beneficial, but because I didn't want to be one of "those" moms. Then I watched my baby thrive on formula, and in a way she couldn't when I was giving her breast milk, and I started to shift my views about formula entirely. Turns out, it was the best thing I could give my baby. Before I had that realization, though, I had to navigate the following assumptions I had about formula that proved out to be wrong: