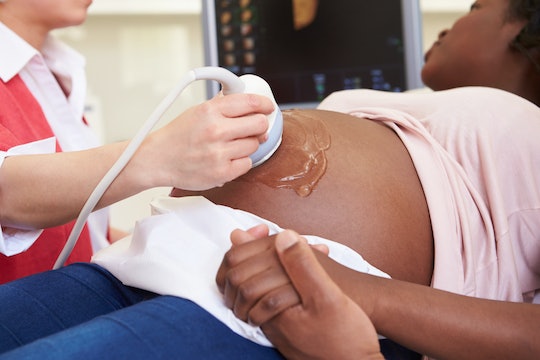 What A Misdiagnosis Teaches You About Your Partner

The moment the doctor entered the room I knew something was wrong. I was pregnant with twins at 19 weeks when one of our son's suddenly died in the womb, so I'd seen that look before. That, "something is wrong," look. Now, at 21 weeks, my partner and I were being told that our remaining son had a heart condition; one that would either kill him after he was born, or require numerous surgeries. I didn't know it then, but I was about to learn things about my relationship you can only learn after your baby has been misdiagnosed. Things that I have continued to carry with me now that my partner have a healthy, thriving 2-year-old toddler (who is hell-bent on defying the laws of gravity).

During an ultrasound, it was discovered that our son had a "thick neck." When a baby's nuchal translucency comes back "thick" — essentially, when the collection of fluid behind a fetus' neck is measuring too great — it's usually a sign of either Down Syndrome or a heart defect. Additional testing ruled out Down Syndrome, but another ultrasound showed (according to our doctors and specialists) a problem with our son's heart. Initially, we were told he either didn't have the necessary number of chambers, or his heart chambers were deformed. Our son would either die moments after he was born (possibly days, if we wanted to focus on the "best case scenario") or he would require numerous surgeries from the moment he entered the world, in an attempt to prepare the damage. My partner and I were devastated. We had just experienced the loss of one of our twins; I was already preparing to birth a baby that was alive and a baby that wasn't; we had already told our friends and family that our twin pregnancy was no more. Now, in addition to the already unbelievable, we were being asked to prepare ourselves for the possibility that our remaining son wouldn't survive, too? It was too much, and I could feel the foundation of our relationship faltering.

However, in those moments of uncertainty and fear and stress, we learned things about ourselves and our relationship that only strengthened our resolve as a couple, and as individuals. We relied on another when we needed to; we gave one another space when it was necessary; we learned how to communication when we didn't feel like speaking. We prepared ourselves for the worse case scenario and, in the process, we became a stronger, more resilient couple. Thankfully, additional testing (and I mean more testing than a freakin' human being should ever be forced to endure) revealed that our son was misdiagnosed. A poorly read ultrasound set in motion thousands of dollars worth of tests and an untold number of horrific, stressful hours. But, in the end, we had a healthy baby boy, born with a healthy, normal. heart. The initial diagnoses was no more, but the lessons my partner and I learned, remained.

More Like This
Stepmom Quotes & Sayings For Every Occasion
A C-Section Actually Doesn't Take As Long As You Think, According To Experts
All Your Questions About Getting Pregnant After A Tummy Tuck Answered
43 Instagram Captions For National Brother’s Day That Say It All