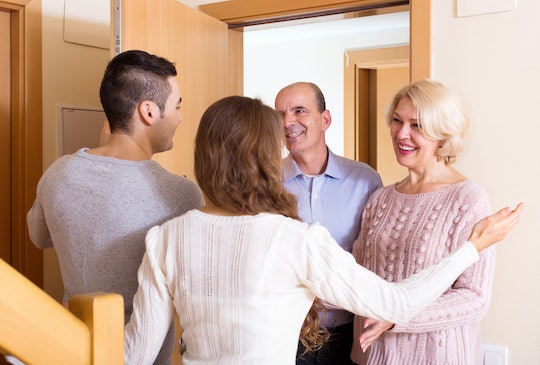 What You'll No Doubt Argue About With Your In-Laws

In more than eight years of marriage (that has included a short stint living in my in-laws' attic as newlyweds) and almost six years as very close neighbors, I've had my fair share of disagreements with my in-laws. Thankfully, most of the disagreements have been amicable, but I didn't realize that becoming a parent myself would bring up more "controversial" topics. It turns out, sleep deprivation combined with stress equals times you'll inevitably disagree with your in-laws.

Disagreements with your in-laws can be especially tricky when you and your partner aren't on the same page on whatever particular parenting topic has ruffled some feathers; whether it's sleep training or weaning. Which, of course, is why it's important you and your partner have the final say in whatever your in-laws are challenging. Whether you explain to your in-laws as a couple, or just check in with each other to make sure you're a united front, having the final word will keep that argument from growing or festering.

When I disagree with my in-laws about parenting, I've always tried to keep in mind that they did a remarkable job raising my husband and his four siblings. So, I have to give them a certain amount of credit and respect for their parenting skills. After all, he survived babyhood and turned out well enough that I wanted to have a kid with him, so they must have done something right. That said, parenting evolves over generations and certain things my in-laws did when they were our age just aren't necessarily our first choice when it comes to raising our daughter.