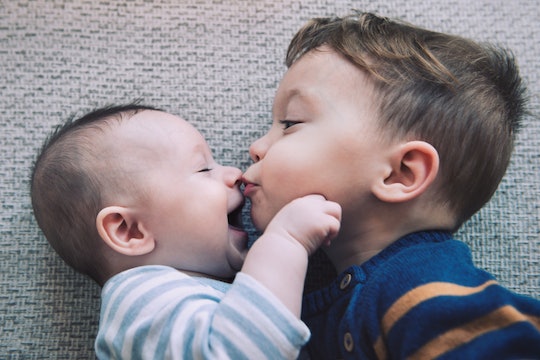 11 Ways Being A Mom Of Two Is Actually *Easier*

I knew having a second child was going to change my life, I just didn't know how. So even though I was excited, I was also worried. I had a good thing going with baby number one, and it took a lot of time and hard work to get to a point where I felt like my head was firmly above water. Was the choice to have a second child going to screw it all up? Turns out, no. While having two kids can be super-challenging, the highs have outnumbered the lows and, honestly, sometimes having two kids is actually easier.

Don't believe me? I don't blame you. Because those challenges I mentioned were intense. Like, really intense. I'm talking "break down sobbing on your kitchen floor because why does no one appreciate how hard you're working trying to make everyone happy?!" kind of intense. But the aforementioned highs? Hoo boy, are they awesome. Seriously awesome. It's like sometimes the universe just knows you've been dealing with a lot and decides to reward you in a way you couldn't have possibly imagined. And, somehow, the cosmic calculus works out in such a way that those two children together are more manageable than just one on their own.

Don't know what I'm talking about? Here's what I mean:

More Like This
The 16 Best Subscription Boxes For Every Kind Of Kid
7 Baby Name Generators To Try
Over 10,000 Sippy Cups & Bottles For Toddlers Recalled Due To Lead Poisoning Hazard
10 Baby’s First Christmas Outfits Cute Enough To Save For Their Kids