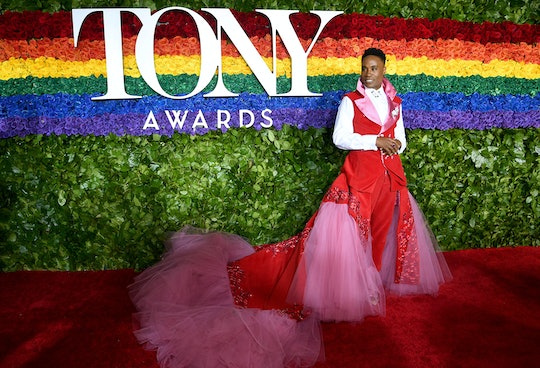 Billy Porter Made A Powerful, Pro-Choice Statement With His Uterus-Patterned Gown

Awards shows have often taken on a political tone in recent years, whether it be through poignant acceptance speeches or moving tributes. And now fashion made a statement at Broadway's biggest night, as Billy Porter wore a uterus-patterned gown to the 2019 Tony Awards in order to call attention to reproductive rights. It's fashion, but it's also important activism.

This isn't the first time the POSE star has made jaws drop with his red carpet look. Remember his iconic tuxedo dress from the 2019 Academy Awards? His attire perpetually plays with the relationship between gender and fashion, breaking down the binary lines historically drawn in thread through ensembles that blend traditionally male and female clothing together. As Porter said on Twitter on Sunday, "I said it once and I will say it again, I’m not a drag queen, I’m a man in a dress." So, in some sense, his red carpet looks are always political, but Porter took the 2019 Tony's as an opportunity to directly challenge the threats to abortion rights happening all over the country.

Porter wore a custom velvet tuxedo dress made by Celestino Couture to the 2019 Tony Awards, which features a red vest with pink lining and red trousers, according to Vogue. The ensemble then flows into a pink skirt that is designed with a subtle uterus-like pattern, bringing activism into the look. (As well as 30,000 Swarovski crystals, by the way.) The pattern is intended to highlight the attempts to restrict abortion access in the United States.

Porter and Celestino Couture designer Sergio Guadarrama collaborated on the gown during the fitting process, and as Porter told The Hollywood Reporter, "I thought [the dress] was awesome because women’s rights are under attack right now. I’m an advocate for all who are disenfranchised. None of us are free until we’re all free!"

What's more, according to People, the dress was also made of recycled material from the Kinky Boots curtain, which Porter starred in back in 2012, bringing even more meaning to the outfit.

The Tony's have been more overtly political than ever in recent years, particularly in the wake of the Pulse night club shooting that killed 49 people, many of whom were gay men; Lin Manuel-Miranda's "Love Is Love Is Love" acceptance speech was in direct response to the event. So seeing Porter, an openly gay man, standing in a hybrid-dress with his husband in front of a rainbow sign was moving in and of itself, but the actor went out of his way to speak up for reproductive health rights, too.

Porter's outfit choice and his statements about it are more important now than ever, as lawmakers continue to restrict access to abortion care through so-called "Heartbeat Bills" and other stipulations, such as Missouri's new law that forces abortion providers to perform unnecessary pelvic exams.

Momentum for these restrictions continues to grow among the far right, and access to abortion will undoubtedly be a major deciding factor for many voters in 2020. And although fashion cannot directly change laws, the choices of those in the public eye can set the tone for how people approach topics, making Porter's open celebration of the female body more powerful than even he may realize.

More Like This
Lauren Conrad Shares Experience With "Lifesaving Reproductive Care" After Ectopic Pregnancy
Meghan Markle Calls On Men "To Be Vocal" In The Aftermath Of Roe v. Wade Ending
Raven’s Chosen Family
Taraji P. Henson Says “Guns Have More Rights Than A Woman” At The 2022 BET Awards