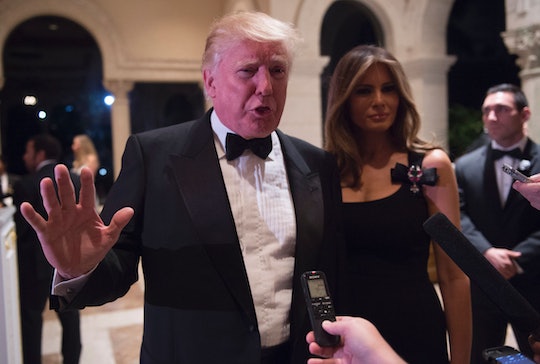 As Donald Trump and his team work to assure the American people that he'll make the country "great again" upon taking office, the president-elect actually approaches his inauguration having earned record low confidence from the people he will soon govern. Most Americans don't believe Donald Trump can handle being president, according to a Gallup poll released this week — a phenomenon that reflects the man's very nature, demonstrated disregard for accepted decorum, and historic lack of political experience, as well as a moment of deep polarization and general distrust for government among Americans. In fact, Trump sports deficits in public confidence in his ability to perform key presidential duties as compared to averages of presidents Barack Obama, George W. Bush, and Bill Clinton before they moved into the White House, the pollsters found.

Trump has displayed an almost comical insecurity about having won the Electoral College but losing the popular vote to opponent Hillary Clinton by nearly 3 million ballots. As much as he attempts to disregard the true outcome of the race, though, the real estate mogul is indisputably the least popular president-elect in modern history — and the fact that less than half of Americans believe that Trump possesses the skills to avoid major scandals within his administration, properly navigate an international crisis, and use the military wisely demonstrates why, at least in part. Romper reached out to the Trump team to learn its reaction to the Gallup poll results as well as how Trump plans to succeed in these areas, but has not yet received a response.

In other areas, respondents were more confident that Trump could succeed: 53 percent believe he will handle the executive branch effectively, 55 percent trust he will defend the country's interests abroad, 59 percent predict he will manage the economy appropriately, and 60 percent envision working with his (Republican-majority) Congress to accomplish agenda items.

By contrast, though, in the areas in which less than half the country believes Trump can perform his job as a president should, Obama, Bush, and Clinton had all earned the confidence of at least 70 percent of people in the United States before they officially occupied the Oval Office. And Trump's predecessors received higher marks in each of Gallup's categories for which data was available. Even though, at 60 percent, public confidence that Trump could work effectively with Congress represented his highest result, his three predecessors together amassed an 82 percent average in that category, according to Gallup. And the current split is much more defined along party lines. While 84 percent of Republicans believe that Trump could use military force wisely, for example, only 17 percent of Democrats do. It's a pattern that holds up across all the categories.

Trump, of course, has done little to reassure those skeptical — and even downright terrified — at the prospect of his presidency that he truly will be a president for all people since his unexpected election win in November. The specter of the unprecedented conflicts of interest that stem from his sprawling international business empire still pose a significant concern. He's unabashedly provoked China and used Twitter to cavalierly discuss the United States' nuclear capabilities. Noted white nationalist Steve Bannon is headed to the White House as chief advisor to Trump. The true nature of Trump's relationship with Russian president Vladimir Putin, whom U.S. intelligence agencies believe worked to interfere with the election to benefit Trump, is unsettlingly murky. The list goes on. (Trump transition team has not returned requests for comment regarding his relationship to Putin or the relationships his Cabinet-appointees have to Putin.)

Still, the hyper charged polarization of the current political climate, coupled with the fact that Trump was only one half of the least popular pair of presidential candidates in modern history, Gallup hypothesizes that Clinton "most likely would have had similarly low expectations of her ability to handle these situations had she won." So, depending on who you talk to, the low confidence in Trump is either a sign of the times or a denunciation of his stated ability to "Make America Great Again" — or both.