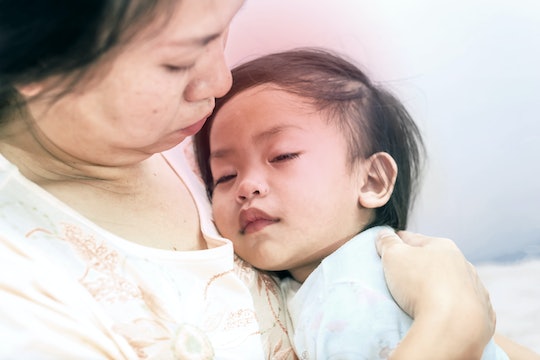 Here's What Toddler Parents Need To Know About RSV

Fall season seems to be synonymous with flu season, but it's not just the flu us parents worry about. Respiratory syncytial virus (RSV), virus that causes respiratory tract infections, is another cause of concern among parents this time of year, but can toddlers get RSV? Or is this a worry us parents can throw on the back-burner once our child hits a certain age?

“Almost all children get an RSV infection by the time they are 2 years old,” Dr. Amna Dr. Husain, a pediatrician with Pure Direct Pediatrics, tells Romper. So while newborns are susceptible to this highly contagious virus, so are toddlers, and even pre-k and kindergarten children.

An estimated 57,000 children under the age of 5 are hospitalized due to RSV infection, though it’s unclear which percentage is toddler-aged. Premature infants and infants in general are atthe highest risk of contracting RSV, according to the Centers for Disease Control and Prevention (CDC), as well as babies under 2 with chronic heart or lung disease. Others at high risk are children with weakened immune systems and those with neuromuscular disorders. While most healthy children will only experience something akin to a light cold, the CDC warns that for others it could develop into bronchiolitis (an inflammation of the lung’s small airways) or pneumonia (a lung infection).

While RSV infections can cause noticeable symptoms in infants, it’s not as obvious in older children, including toddlers. The good news, however, is that for most children, RSV isn’t really that big a deal. There’s even a good chance your baby or toddler has already contracted it, and you were none the wiser.

If your toddler does begin to show signs of a cold and they don’t improve, though, you may want to take them in to see their pediatrician who can give them a nasal swab to check for the virus.

“As a pediatrician, I always have my patients, especially the younger ones, return for the next few days during the onset of RSV or any virus that can cause bronchiolitis,” Husain says. She explains that this is because RSV bronchiolitis can often take a turn on days 3-5, at which point the virus can become more severe.

“I like checking back in frequently with parents and laying eyes on the child myself to ensure feeding is going well and breathing isn’t labored,” she says.

So, is there a way to help your toddler avoid RSV this season? “The best things to do are really the old-fashioned principles, [like] washing your hands often,” Husain says. She also recommends parents wash their toddler’s hands (and their own) with soap and water (versus alcohol-based sanitizer) prior to eating.

“Try to keep your child’s hands off his or her face, especially [their] nose and mouth, as this is the fastest way for most common infectious particles to spread,” Husain adds.

Other recommendations from both the CDC and Husain include frequently cleaning and disinfecting frequently-touched surfaces (such as door knobs, countertops, and toys), reminding your little one to cough or sneeze into their elbows, and staying away from other people. Because RSV can easily spread from direct contact with noses and mouths, as well as droplets in the air, it’s important to keep sick kids home and away from vulnerable populations especially. That means skip out on playdates, the park, daycare, or any other public place where your child would be in contact with other children.

There are new added concerns for parents of toddlers, however, as a new study published in the Journal of Infectious Diseases reveals that older infants (over 6 months) and toddlers who are hospitalized for RSV are at greater risk of being hospitalized for asthma-related reasons later in life. This association with asthma-related hospitalizations does not seem to exist for infants under 6 months of age, despite the fact that RSV is generally more dangerous for younger infants.

As for a vaccine that might help reduce or eradicate the threat of RSV (especially for vulnerable populations), it’s still in the works. Earlier this year, Science Daily reported on an experimental vaccine for RSV that has shown some promise in a human clinical trial. The study involved 40 adult volunteers, and the results found that the current vaccine candidate prompted a 10-fold increase in the antibodies that neutralize RSV. There are other vaccines currently in the early stages of development, too,, including one by Novavax, Inc., a biotechnology company that has already reached Phase 3 in clinical trials for their vaccine, ResVax.

For now, there is only one form of treatment that can be administered to high-risk infants to help prevent RSV: palivizumab. This treatment is rarely recommended for anyone over the age of 2, however. “I highly recommend (it) to my patients who qualify,” Husain says.

Otherwise, the best treatment is the preventable kind, so make sure you, and your toddler, wash your hands often.

More Like This
Should You Be Giving Your Toddler Melatonin To Help Them Sleep?
17 Best Potty Training Products For Toddlers
26 Toddler Lunch Ideas They’ll Actually Be Excited To Eat
All The Reasons Why You Might Have A C-Section